From March 18th to June 15th, 2017, OCAT Shenzhen is proud to present “Simon Denny: Real Mass Entrepreneurship,” the first solo exhibition in China of the New Zealand artist, at C2 Space in OCT-LOFT. All newly commissioned for the exhibit, the works on view see a continuation of Simon Denny’s information technology-charged projects. Through his indepth investigation of Shenzhen’s ecosystem, the artist reflects on the high-tech industry’s role in reshaping the world’s economic horizons. The exhibition title echoes the timely call for “mass entrepreneurship and innovation” in contemporary China. Taking Shenzhen’s accelerated production model as its point of departure, “Real Mass Entrepreneurship” looks at the myth of the small technology hardware business owner as global hero.

Denny visited various types of cultural organizations and tech hubs in Shenzhen, among which the Window of the World (a theme park located in Nanshan District that opened in 1994 and soon became a popular tourist attraction in Shenzhen, squeezing downsized reproductions of cultural landmarks in various countries around the world into a 49-hectare playground) and Huaqiangbei electronic market. The two sites each form a unique image of the history of China’s urban development: the first one, a theme park, was born out of the domestic need for tourism in the 1990s, then became the window through which Shenzhen gazed at the world and that which provided possibilities for China to measure its place in a globalizing network; the latter is a product of the principle of the special economic zone—to accelerate social development through technological innovation. At one point Huaqiangbai even became world-renowned for its accelerated production model; after four years of construction, its main pedestrian street has been recently revamped and is now open to the public, together with a metro station. What concerns Simon Denny is not technology alone but also its associated economic implications and the role it plays in the economy of attention and images. Many of his earlier works—from reformatting the content of the elite tech conference DLD (Digital Life Design) from 2012 into a timeline that puts its rhetoric to the test in All You Need Is Data – The DLD 2012 Conference REDUX rerun (2013) to reenacting the Samsung Group’s “Frankfurt Declaration” to unpack the South Korean company’s corporate philosophy in New Management (2014)—readily reflect this research methodology. “Real Mass Entrepreneurship” is, to an extent, a continuation of this practice: the various large-scale public sculptures endlessly remodeled, replaced, and reproduced in theme parks precisely mirror the individual entrepreneurs enabled by the incubators and accelerators leading the movement of “mass entrepreneurship.” The artist has rented from a theme park workshop several large-scale models made of materials such as fiber-reinforced plastic and wood in the varied forms of various bodies/figures mushrooms, greek pillars, arches, and stones. Installed in the exhibition gallery, these objects look at once both strange and familiar; they seem like they could exist in a commercial space of any given city without looking inappropriate and yet, like virus infections, they quietly transform these physical spaces into “nonplace”—a term coined by Marc Auge to describe a highly homogenized place for people to pass through, such as an airport. Often produced as festival supplies, many of these sculptures are remarkably short-lived and are imbued with a striking degree of substitutability through fast production; as soon as they are out of the factory, their final moment of abandonment and disappearance becomes predictable—as if they carry with them their own ruins every moment of their existence. Meanwhile, the artist’s symbolic distillation of Huaqiangbei more explicitly illustrates the technology industry’s relentless reconstruction of the urban landscape. Asseveral tech markets in Huaqiangbei swept out their old display cases and turned minimalist in style, some even equipped with compartments of laboratory aesthetic, Denny scavenges a few of the abandoned glass counters, and replicates them in the same materials and finish as the theme park sculptures he borrows. This echoes the methodology used in Blockchain Future States, a 2016 work in which Denny produced multiple editions of stamp design derived from the board game, Risk.

Approaching the exhibition title, “Real Mass Entrepreneurship,” one should tend to the notion “real”: what kind of reality has been produced by a market fueled by electronic and virtual products? The interpunct—as used in the Chinese title—between “real” and “mass entrepreneurship” was traditionally used for the purpose of between words separation in the Chinese translation of foreign and minority names, book titles and chapter titles, but later became ubiquitous in computer games and films in which the vertically centered punctuation mark is re-appropriated to serve the function of juxtaposing different nouns, the most pressing case of which is a Japanese FTG game set in the world of the Three Kingdoms, a historical era marked by the tripartite division of China between three states. The seemingly frivolous and pop-culture-infused interpunct in the exhibition title induces a critical halt that suspends any relationships outside of the semantic system and, in this way of writing, lays its emphasis instead on a “disengaged” distance—just like the tourists wandering through the Window of the World, overlooking the macroscopic spectacles of Manhattan, the Eiffel Tower, and Anglor Wat. Known for its globalized economy, Shenzhen is often regarded as the “factory of the world,” or the home of shanzhai, but what Denny has attempted to accomplish is to stand independent of the West—the center—to trace the city’s imagination of the world through the Window of the World and Huaqiangbei, two places which have allowed to him to critically reflect on alternative forms of globalization and internationalization. During the exhibition preparation, the curator and the artist both found out by surprise about a nutrition produce brand also named “Real Mass.” It subtly explicates the law of urban renewal: when exercising to build muscles, the muscular tissues need to be slightly damaged and lacerated before they regenerate with the aid of nutrition supplement—exactly the way in which the urban fabric of countless places around the world regenerates itself.

For Simon Denny, the notion of “mass entrepreneurship” not only signifies a socioeconomic activity, but also alludes to the repeated duplication and subrogation of “individuals” in the system of production. In a globalized network, individual entrepreneurs representative of innovation and advancement are seduced by fabricated myths and plunge themselves into science and finance through ways of incubation and acceleration, eventually becoming part of the masses. As if produced on the assembly line, these individuals are just like the items in those Huaqiangbei counters, perpetuating a cycle of production and consumption of a different nature. 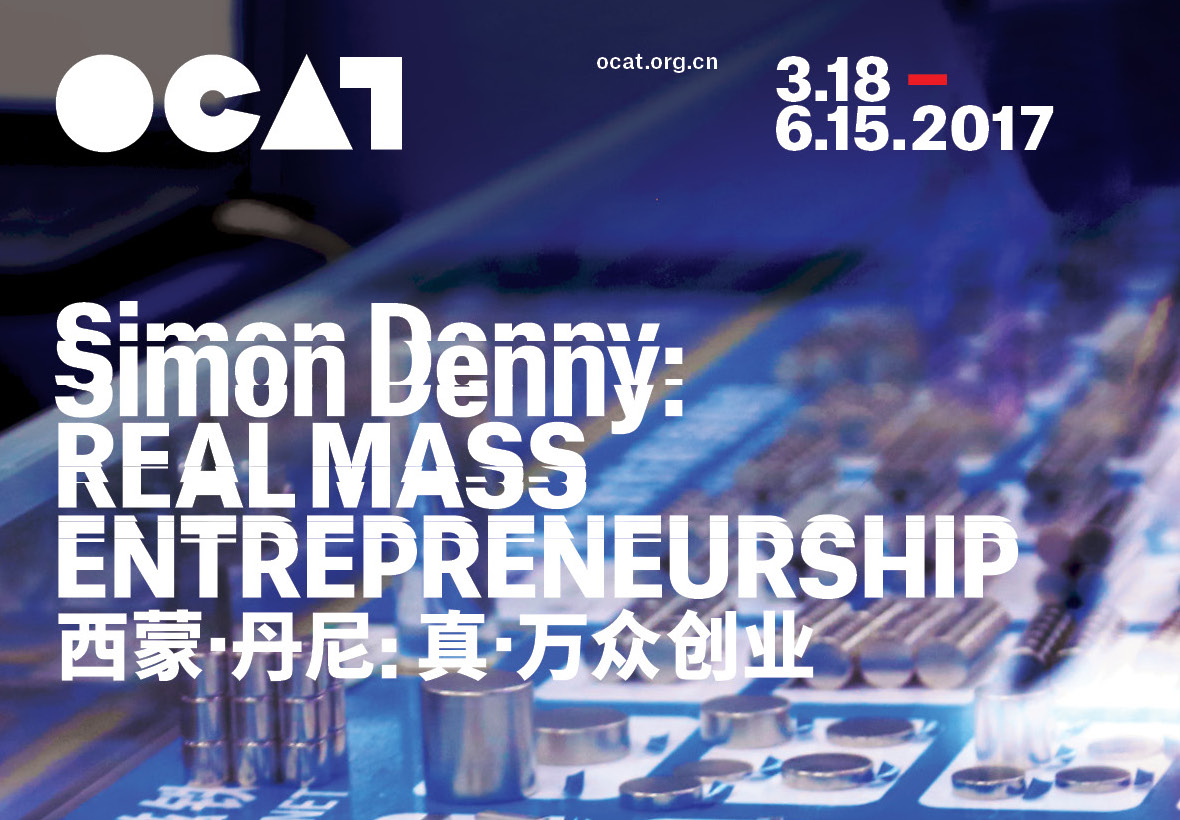