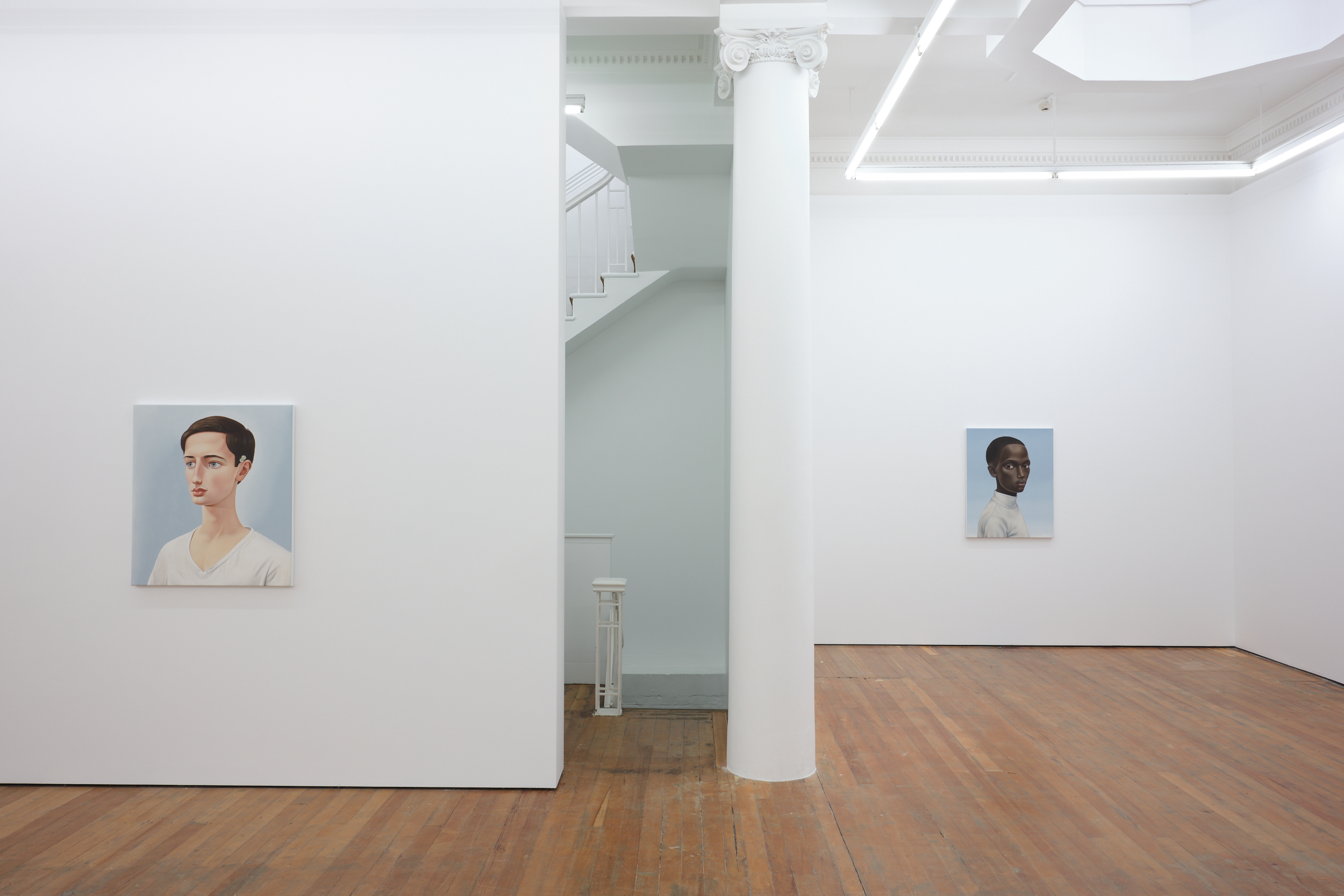 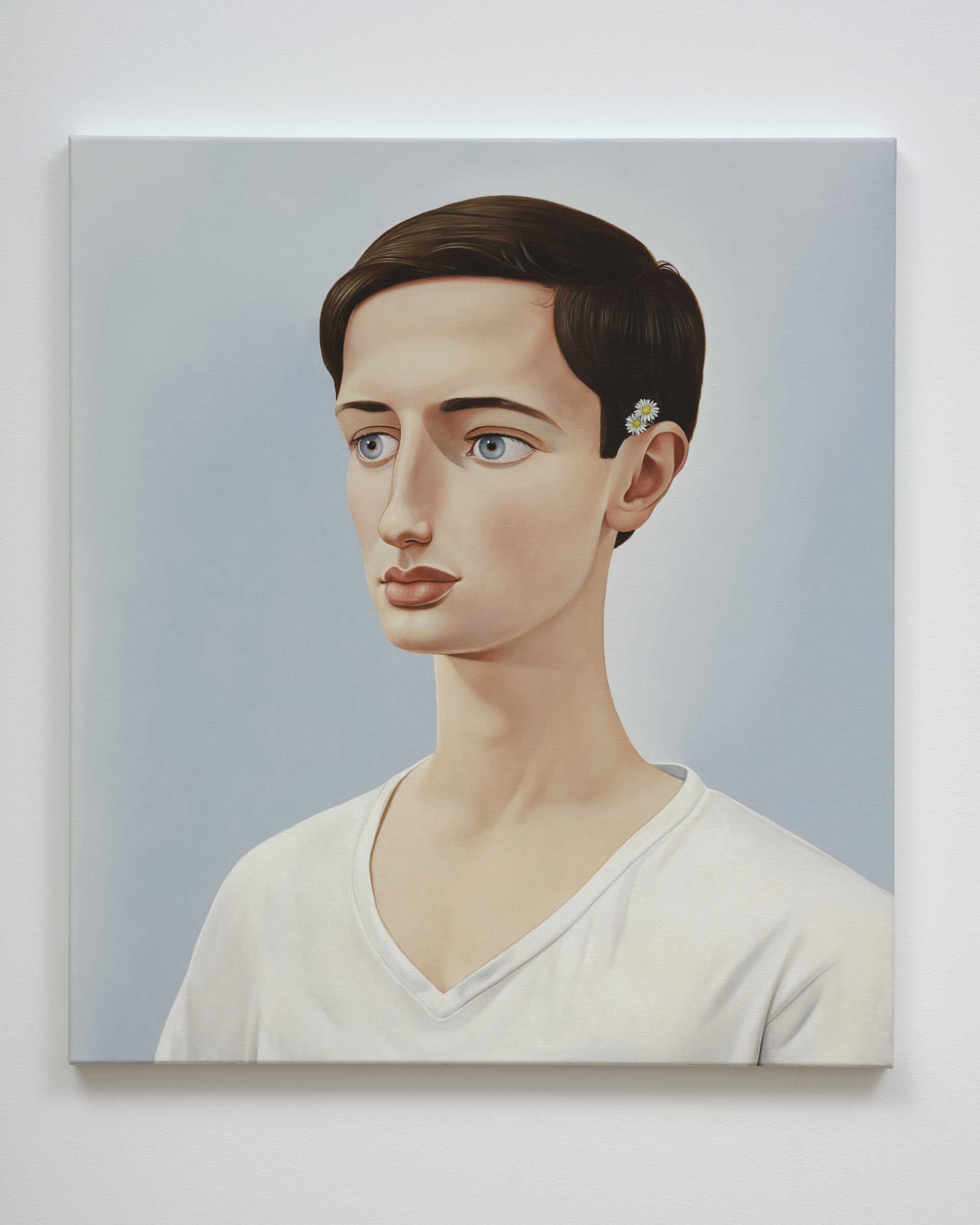 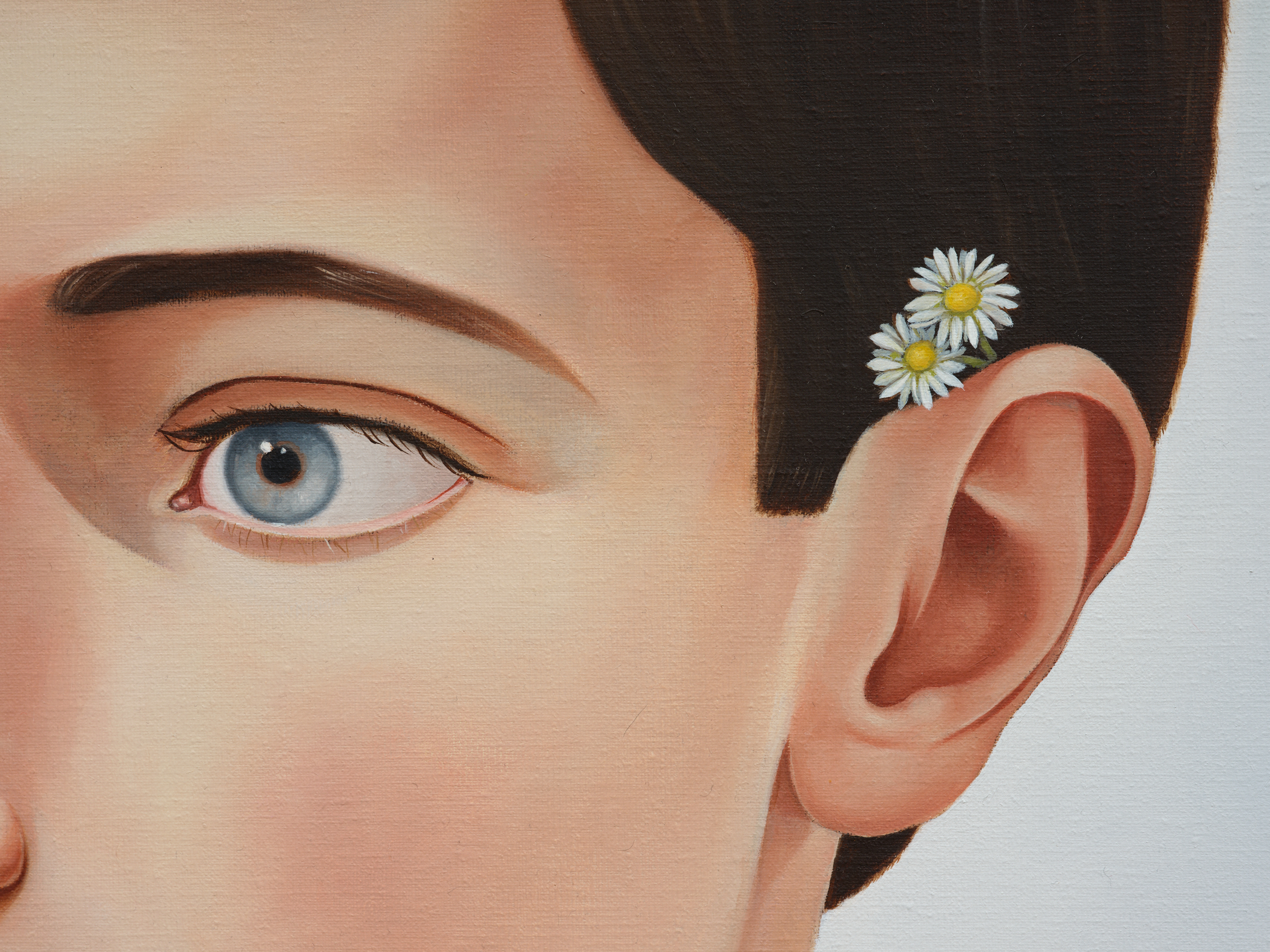 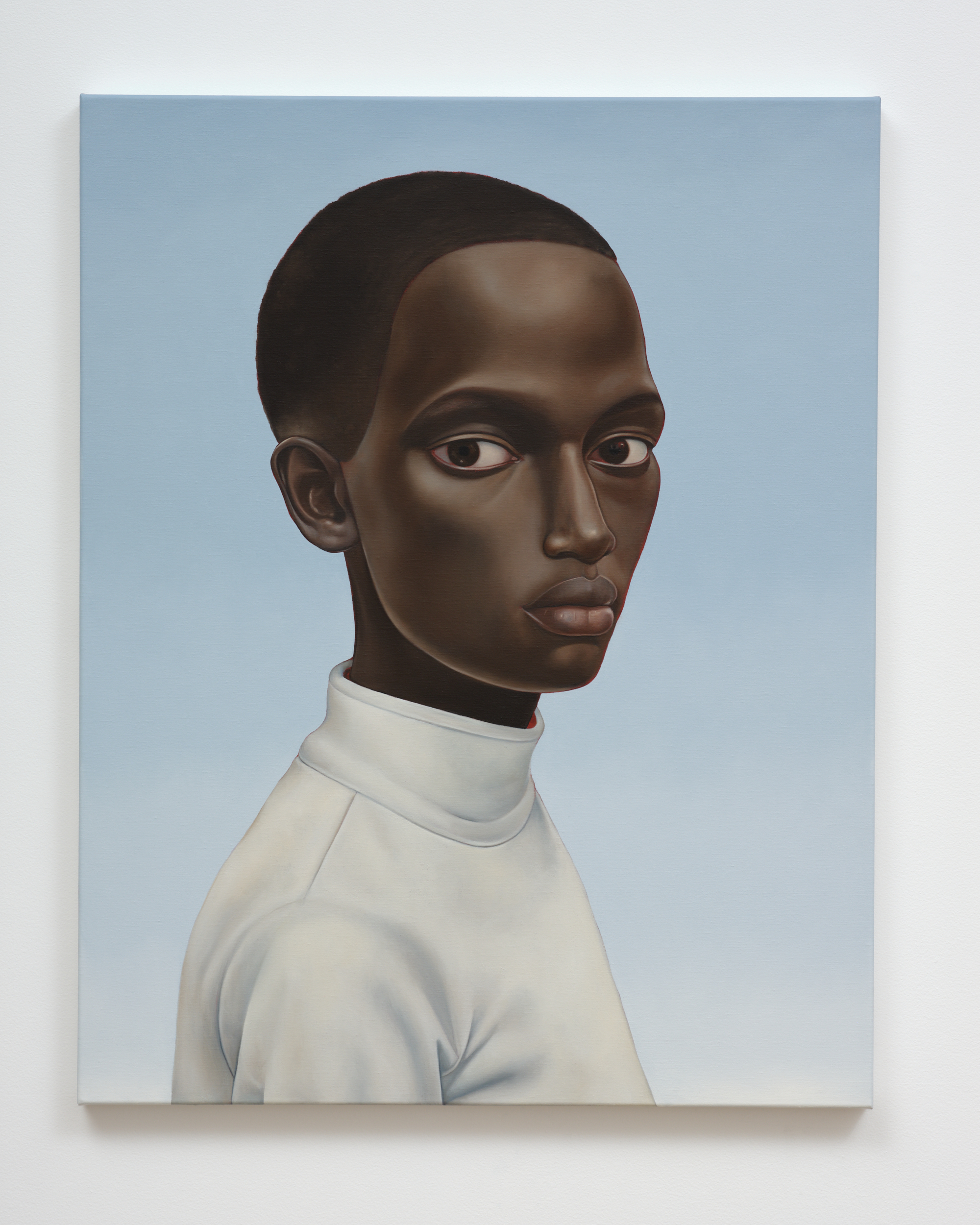 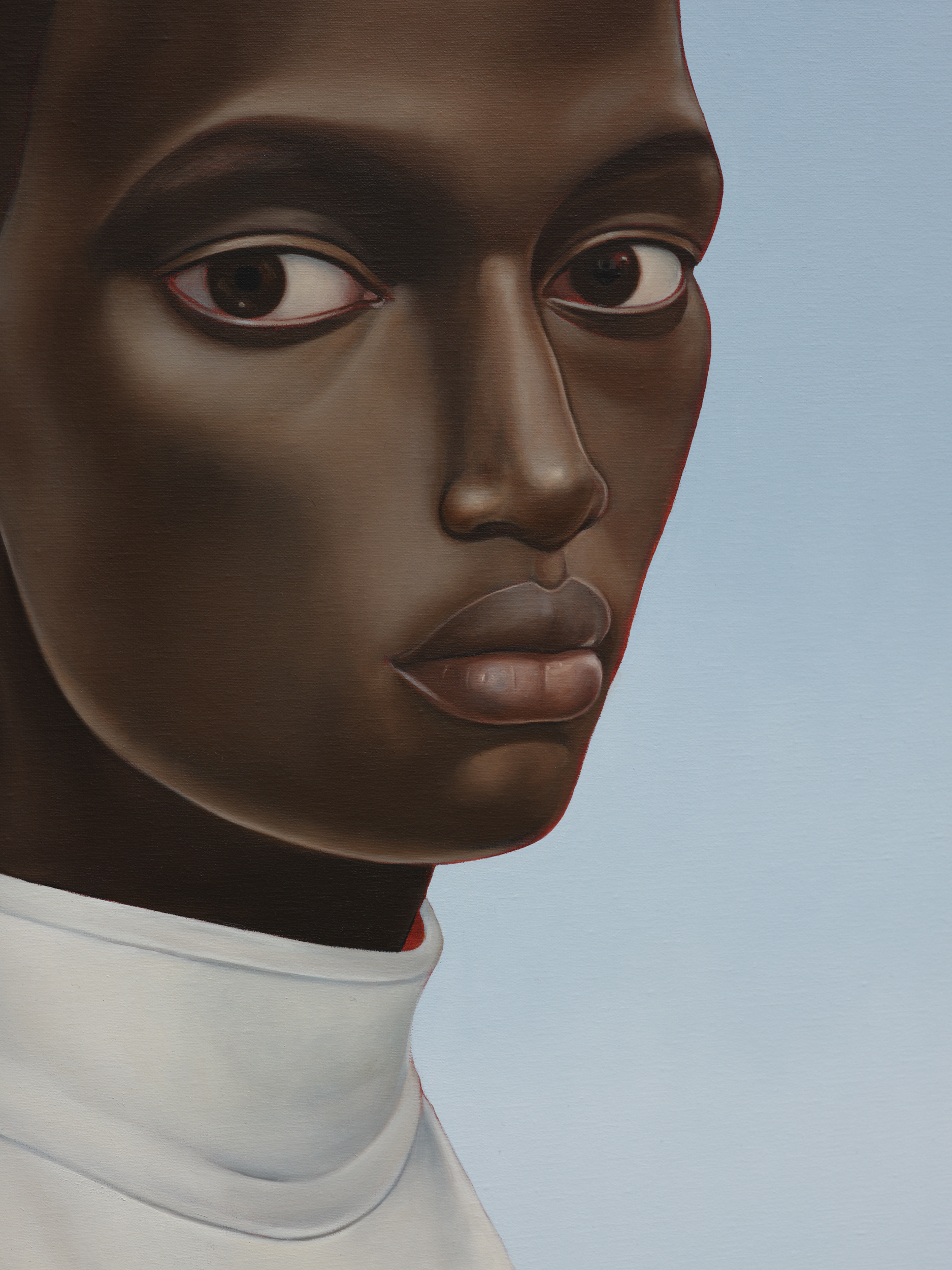 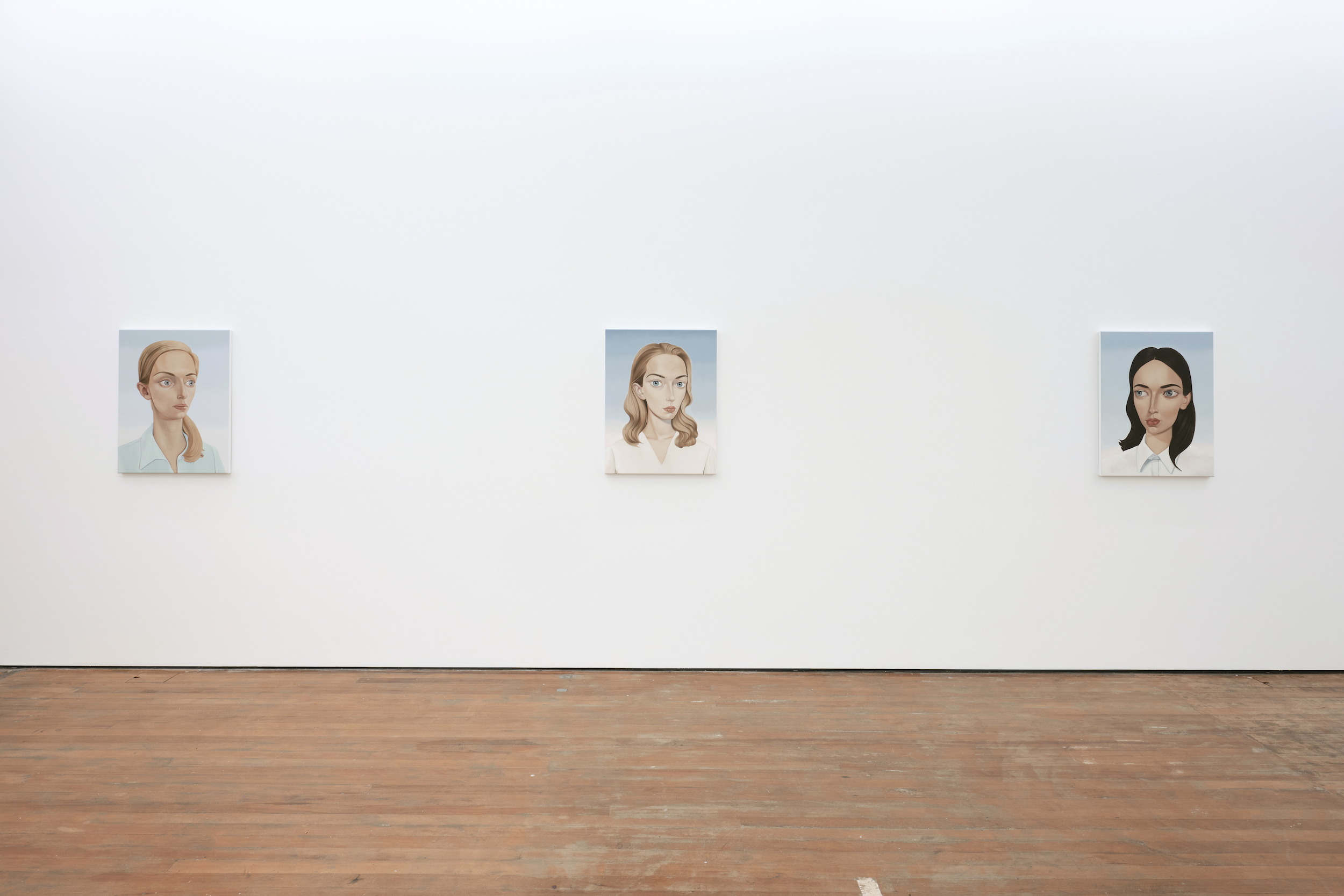 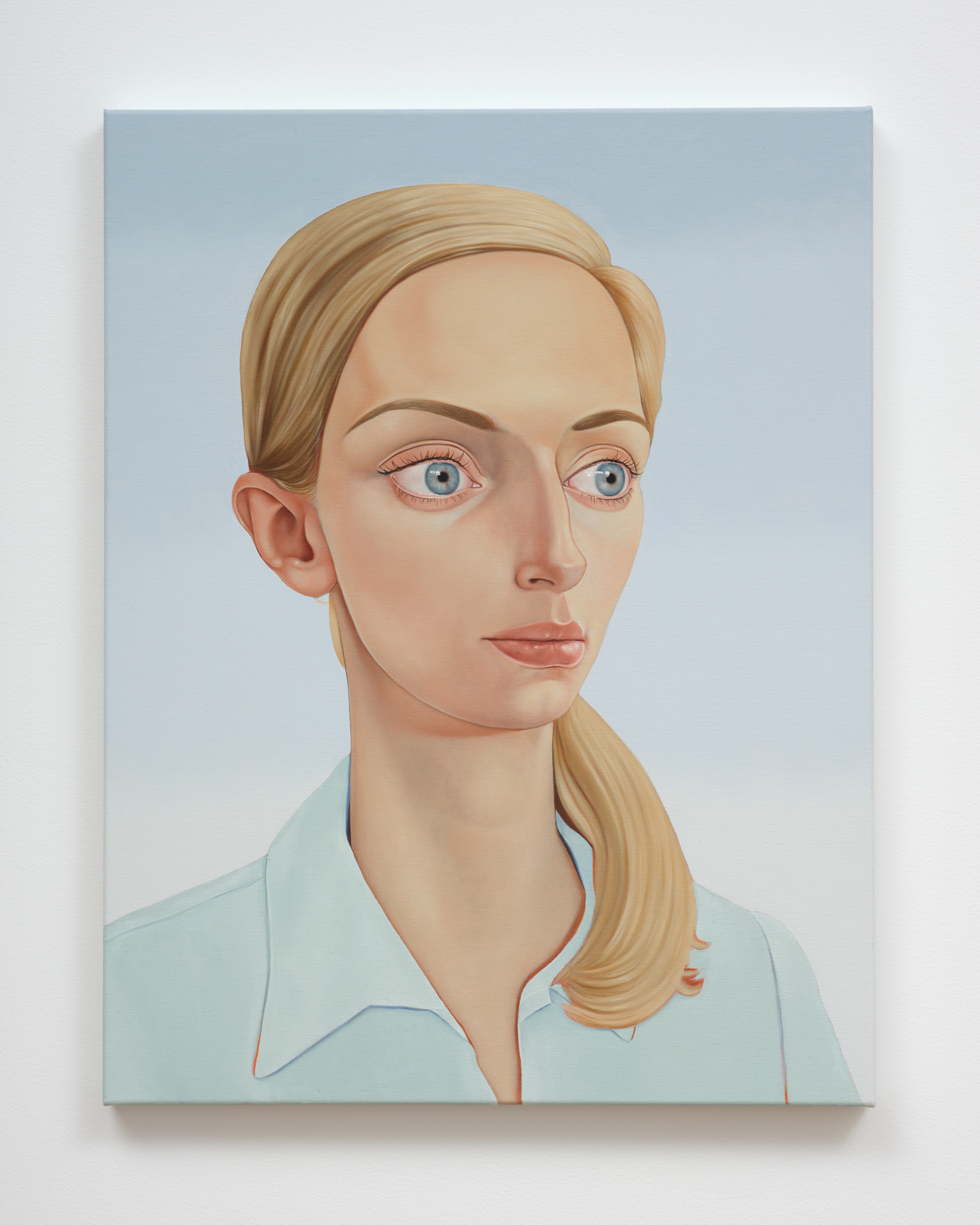 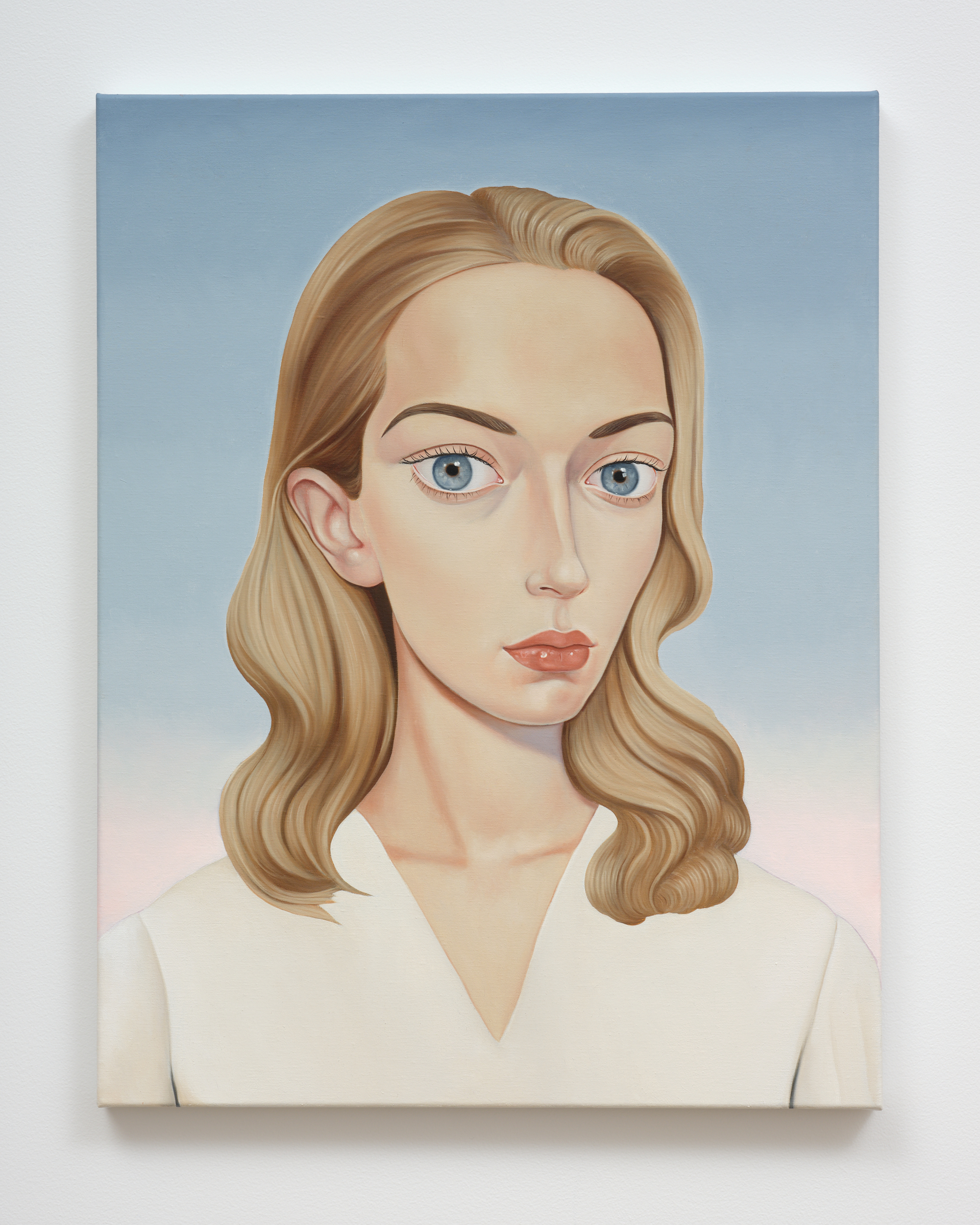 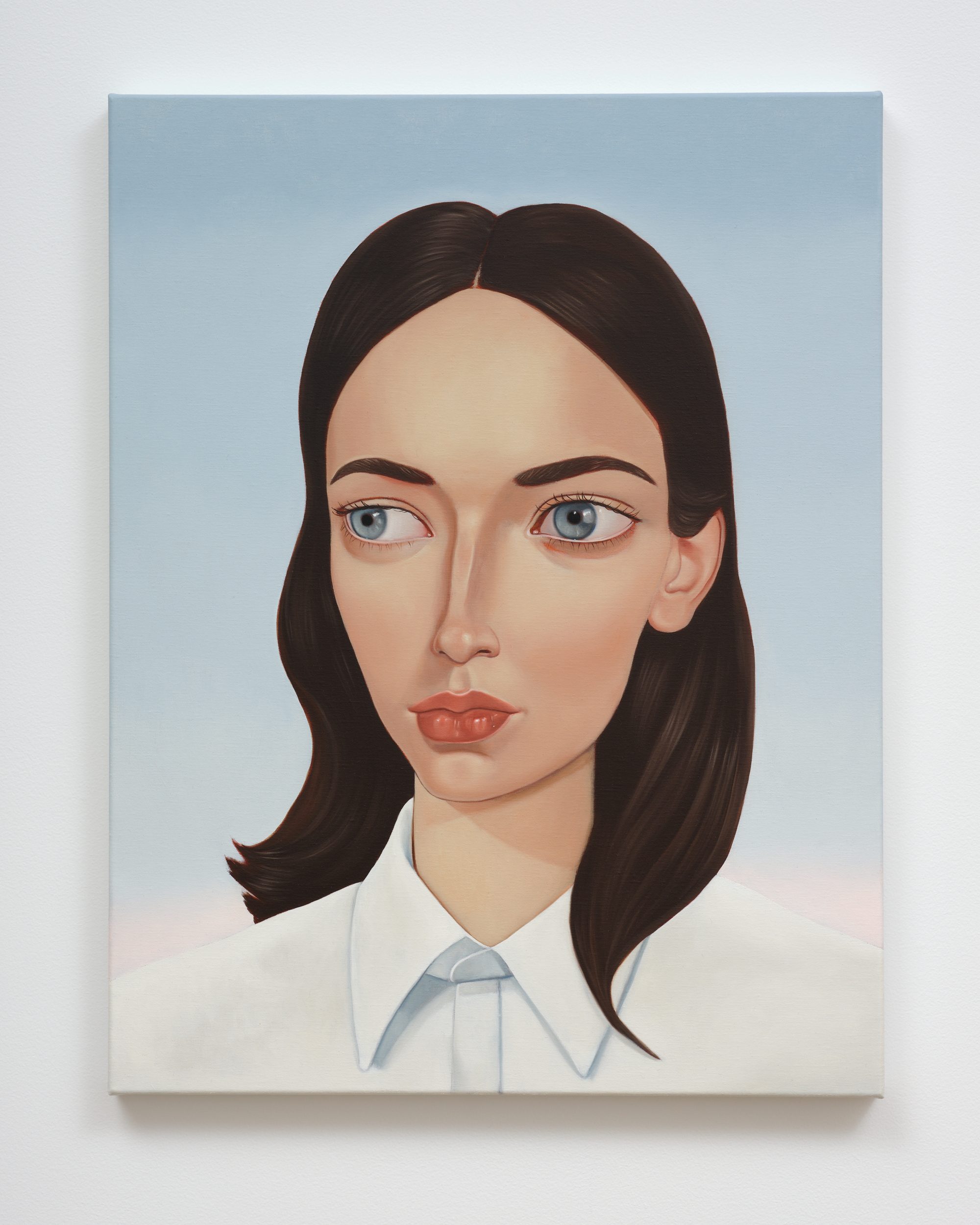 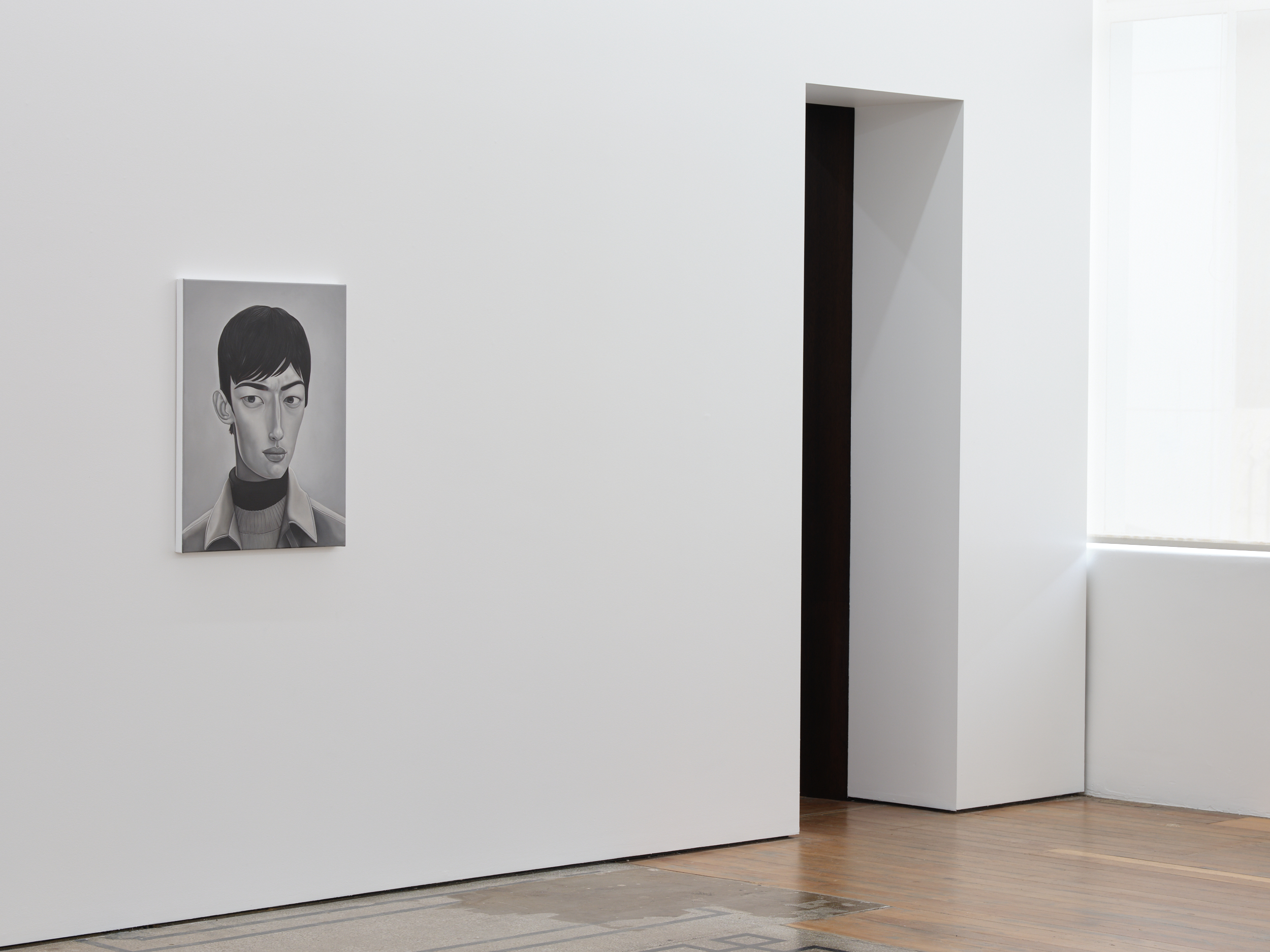 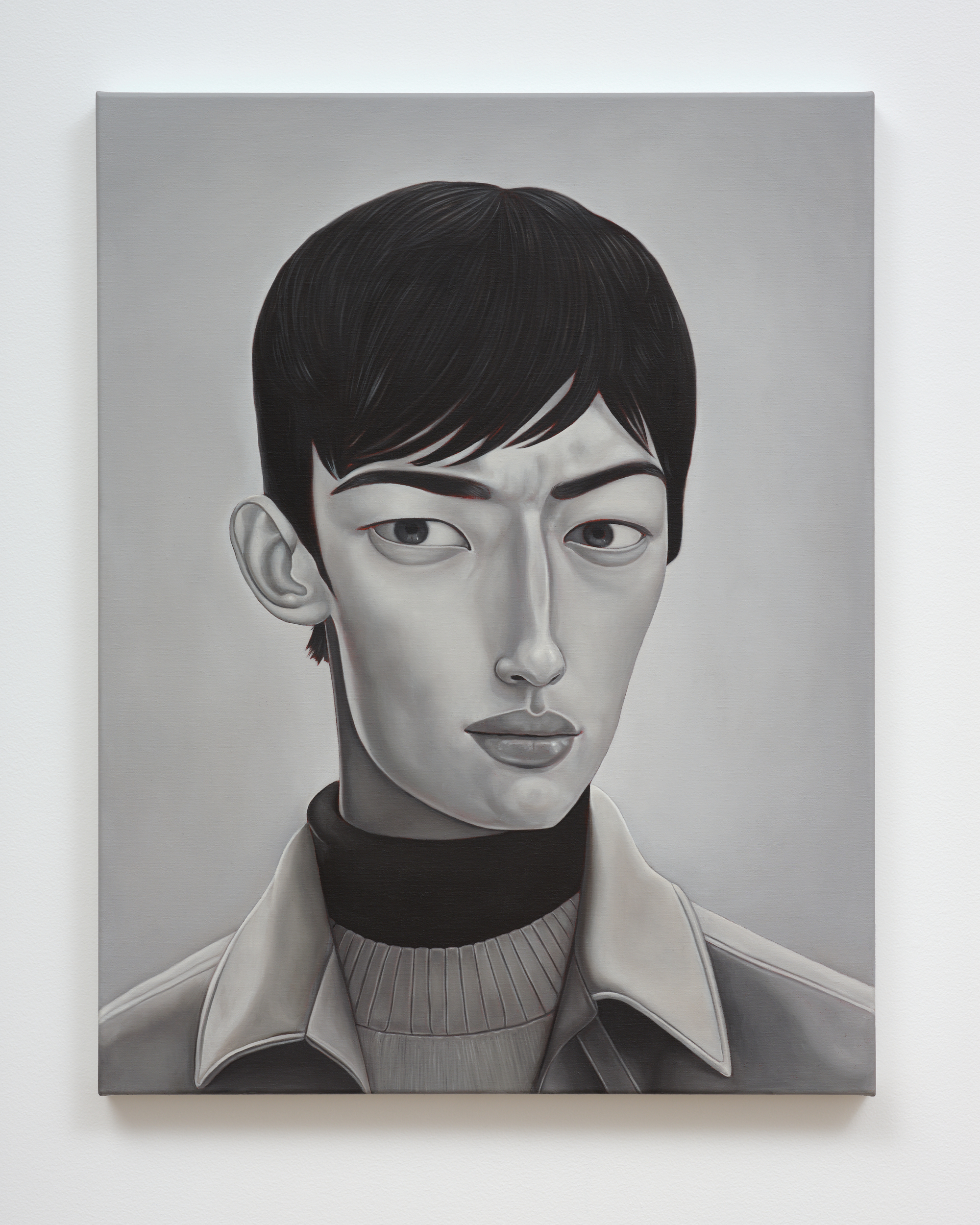 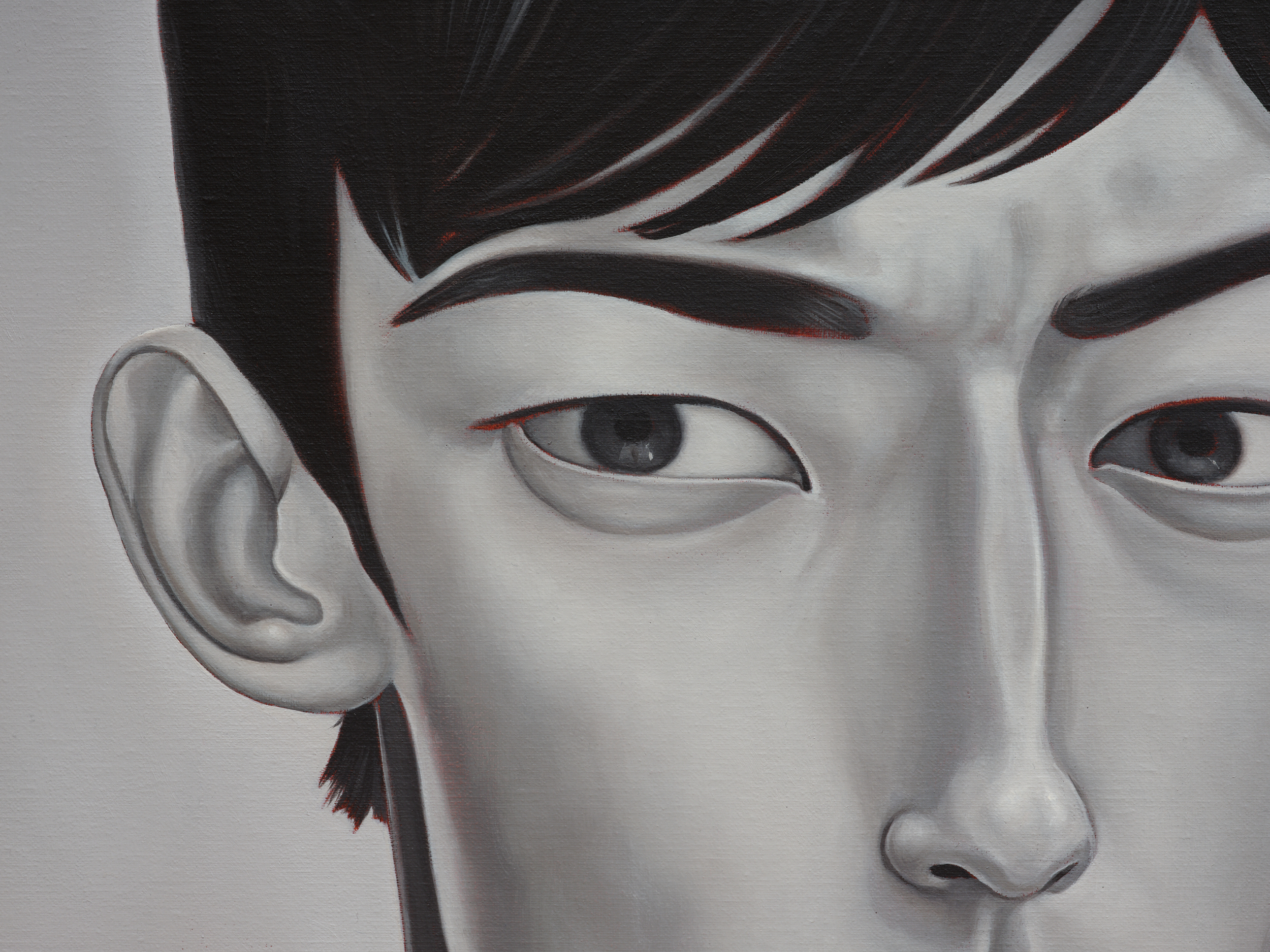 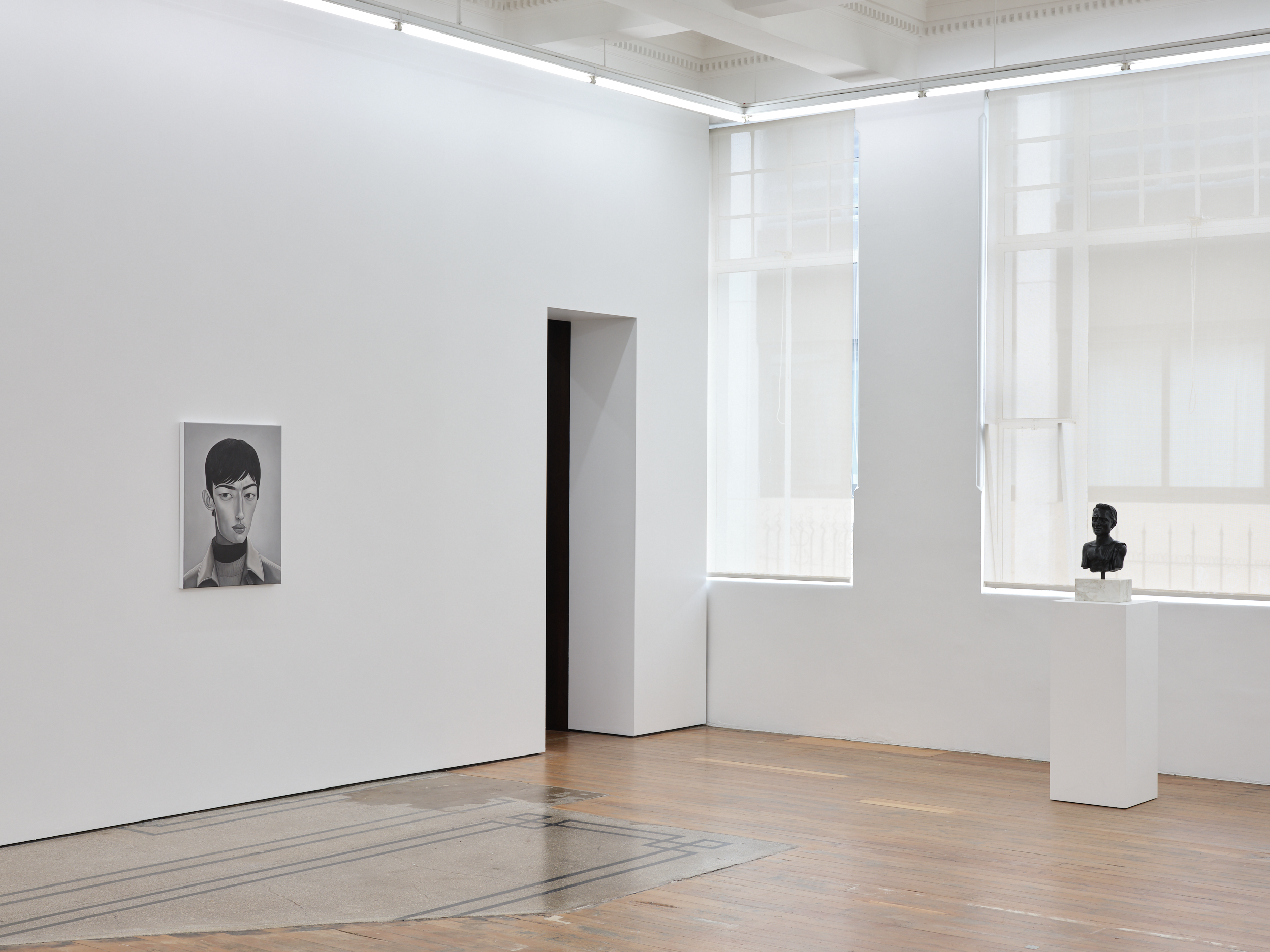 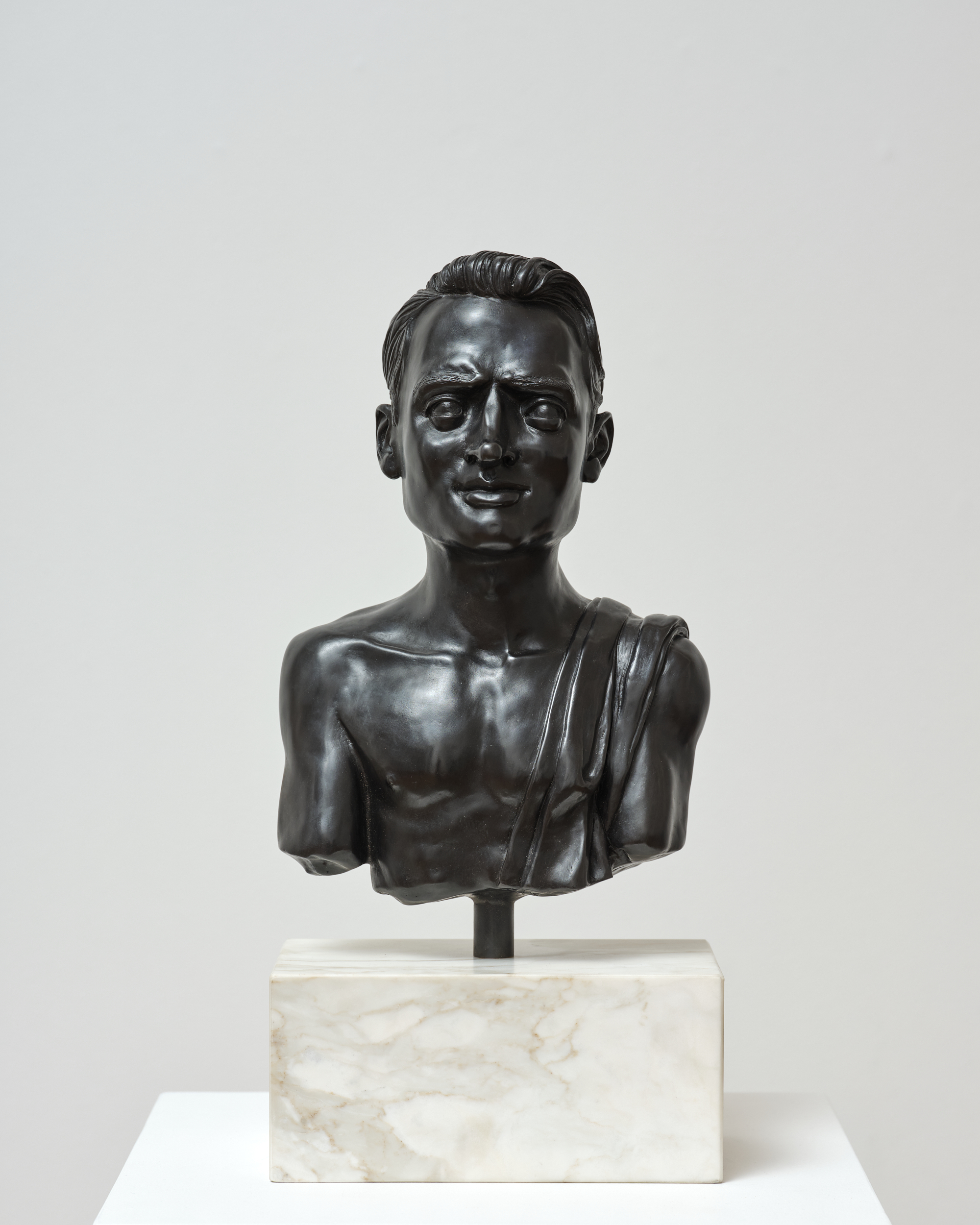 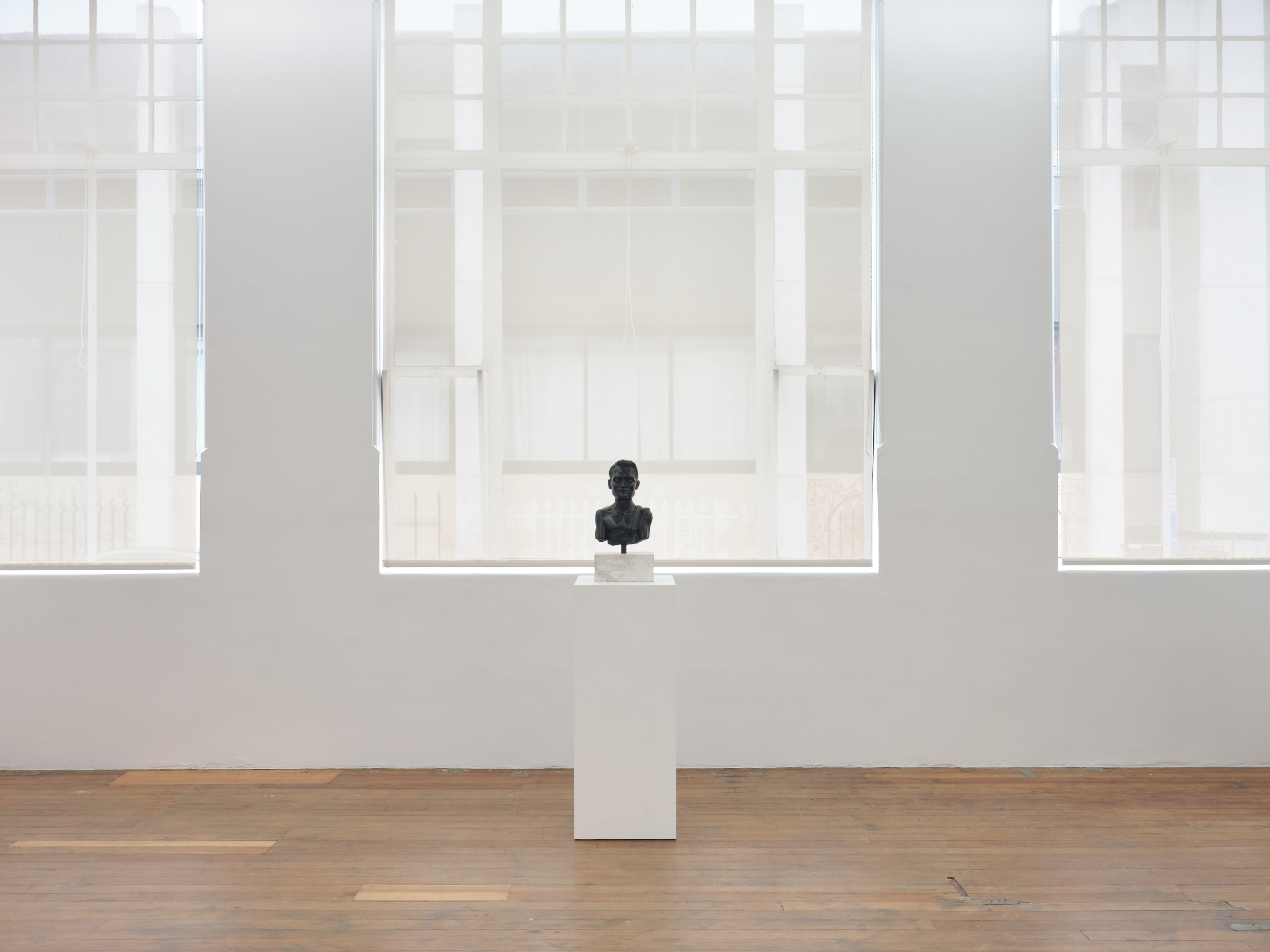 Crisp outlines, marblesque modelling, and three-quarter views coalesce to create six arresting figures that are both pattern-like and sculptural in this new – yet familiar – community of Peter Stichbury’s painterly world. The figures are reminiscent of fifteenth-century portraits, such as Rogier van der Weyden’s captivating Portrait of a Lady, with their strong, almost abstracted forms against plain backgrounds, their faces ethereally beautiful with elegant, exaggerated features, silky smooth skin and freshly brushed hair. The colours harmonise both within individual canvases and across the community of painted souls, as if to locate them all in a transcendent sphere somewhere else: creamy whites, cool blue-grays, pearly pinks, rich browns and smokey grisaille. Their hypnotic, searching stares, direct and unblinking, see through and above us, inside themselves, and out to the universe. Insistently seeing figures, they also probe for sound. All are positioned with an ear – a single, wonderfully tactile ear – primed to hear. The voices they have heard, the voices they seek? The voices of souls, the afterlife, protection and redemption.

The titles of the pictures record the names of the subjects: Mary-Jo Rapini, Jessie Sawyer, Vita Ventra, Marty Martyn, Elysium and Elysian Field. The first five have a primary identification in an historical person who has spoken about their near death experience or reincarnation. Vita Ventra – whose first name means ‘life’ in Latin  – may have reinvented herself in name, too, after her near death experience. Although based on the stories of real people, they do not necessarily resemble the real-life subject. However, in appearance, they are identifiable as part of the Stichbury species of souls. In their experiences, too, they are part of Stichbury’s world of the liminal.

The other two figures, Elysium and Elysian Field, are attributed mythic titles based on the Greek term for the blessed afterlife, a resting place for the good and heroic. The subjects of these two pictures are modelled on real-life people, models Tasha Malek and Hang Yu. As such, none of these works are traditional, commemorative portraits. Moreover, Stichbury’s community of souls inhabit two worlds – individual and archetype, physicality and spirituality, life and afterlife. They are benign figures in a regenerative world – hence the ‘ecology’ of the exhibition title – that sees and listens.

Elysium and Elysian Field are the guardians at the gates of paradise, negotiating between this world and the next. The male figure, Elysian Field, is formed from a painted field of grisaille. His otherworldly face is framed with opaque black hair, pronounced and incised like his eyebrows, and with chiseled features, his layers of clothing both soft and sharp. A portal for souls, Elysian Field’s scrutinizing side-gaze and alert ear suggest lines of communication but also a willingness to close the door to paradise to the undeserving. The female figure, Elysium, is the most powerful figure in paradise – positioned with greater authority than Elysian Field and the other souls – on high. She looks at us – and the other souls – with cool, benign authority, her face devoid of any tension, her statuesque neck emphasised with the high-neck shaping of her white shirt. The gentle folds of the neutral garment, as with the other clothing in the paintings, is quietly harmonising and humanising for a figure that inhabits two worlds. She is rendered with a quiet force and mesmerising beauty that make her a perfect embodiment of Elysium.

The souls that have entered – and will enter – this paradise surround them. Four are women whose trauma led to near death experiences. Amongst them is Texan Mary-Jo Rapini, who had a near death experience after suffering a brain aneurism. Rapini has described how she saw a pink light and talked to God, who insisted she return to life to ‘do better’, and she is now a psychotherapist. Although the image bears some resemblance to the real-life Rapini, Stichbury has painted her as an archetype, a soul, with his characteristic broad forehead, large eyes and lips, moulded hair, long nose and small chin. The spiritual pink light infuses her cheeks and the bottom of the canvas.

Tennessean Jessie Sawyer has recounted her near death experience after a hysterectomy, entering a bright realm, comforted and devoid of pain. Her identity, too, morphs from life to death, historical person to depicted archetype, in the work, which joins her into Stichbury’s community of beautiful souls. Vita Ventra, too, has recounted her extreme experiences after a car accident, speaking about feeling outside her body, ‘shapeless, odourless, colourless, genderless, part of the air’. If the image of her provides shape, colour and gender to her form, there is nevertheless a powerful liminal aspect of her appearance, as she gazes into the distance, suffused in light.

The childhood experience of Ryan Hammons, whose uncanny recollection as a five-year-old boy from Kansas of his previous life as a Hollywood agent and small-part actor, Marty Martyn, has also captured Stichbury’s attention. Here, the youthful subject – neither the age of the boy at the time of his recollection or Martyn at his death aged 61 – stirs preternaturally ageless. The two small daisies above his ear – that all-hearing ear that is the leitmotif of the exhibition – speaks of regeneration, rebirth, of two souls matched in one body. His clean, gently crumpled white t-shirt also locates him in a timeless space. Basking in a pink glow that radiates over his face, ear and neck, the subject actively communing with the soul.

The subjects and their powerful spiritual experiences could so easily be reduced to lurid, jeering characterisations, especially in the postmodern, secular art world. Stichbury’s quiet, restrained, probing brushes dignify them, listen to them, believe them. These works remind us that art is inherently a kind of magic between two worlds – the artist’s mind and the artwork, soul and creation, ideas and paint. It demands some suspension of disbelief, some faith. The painted face, too, whether a portrait or an allegorical figure, inhabits two worlds, the subject and the object. And all art depends on a viewer who will look and – as Stichbury’s ‘Ecology of Souls’ insists – listen to them.