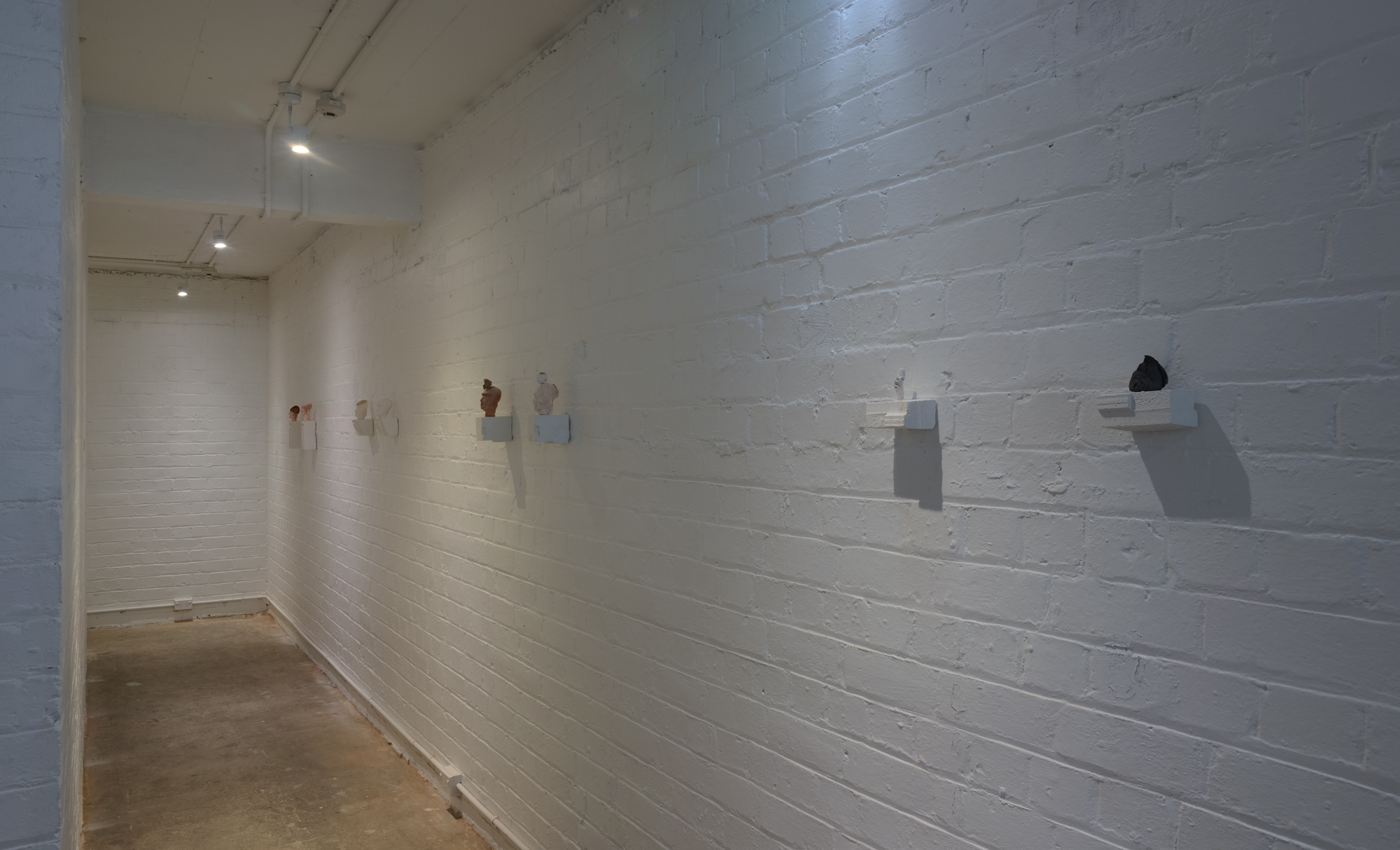 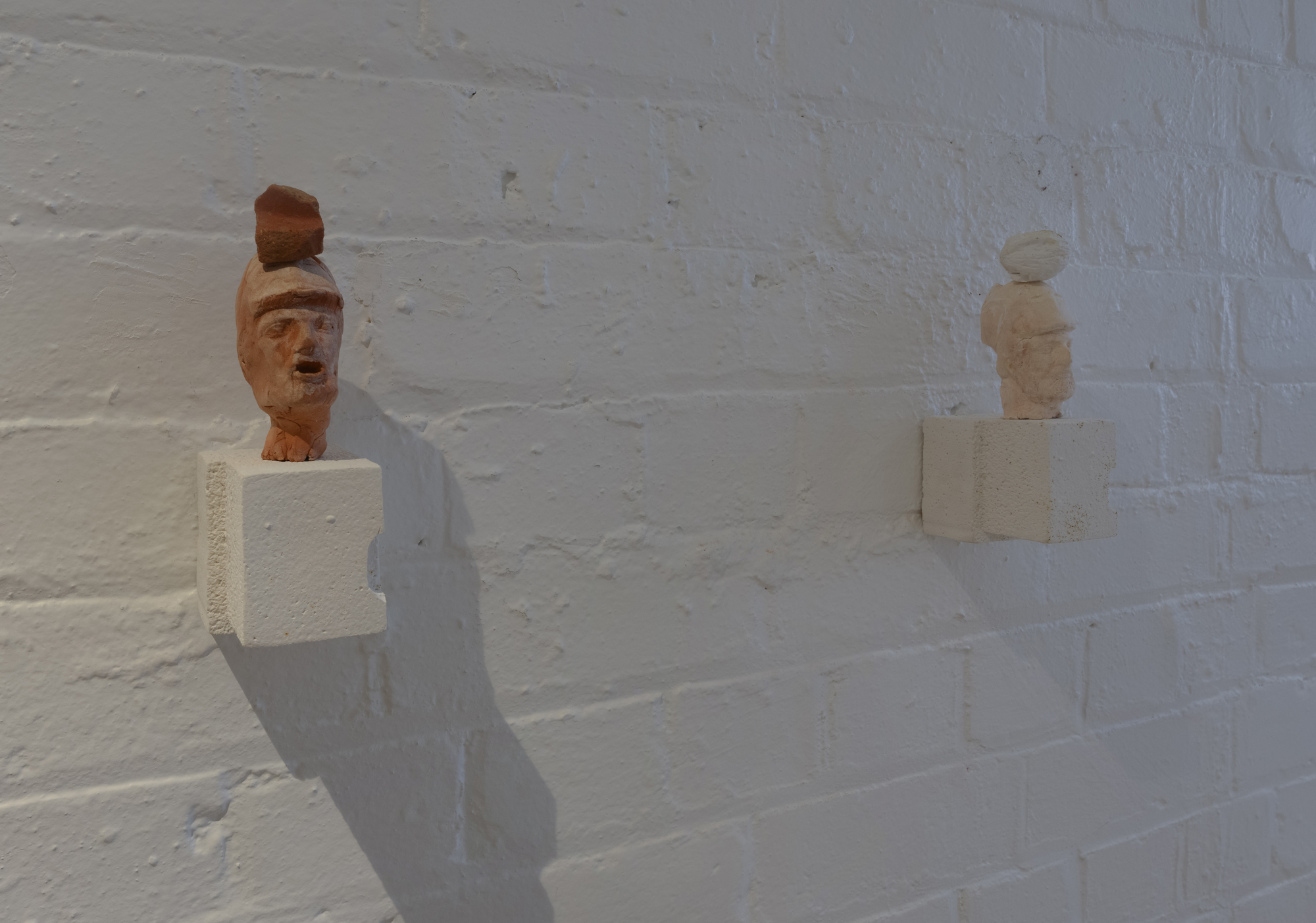 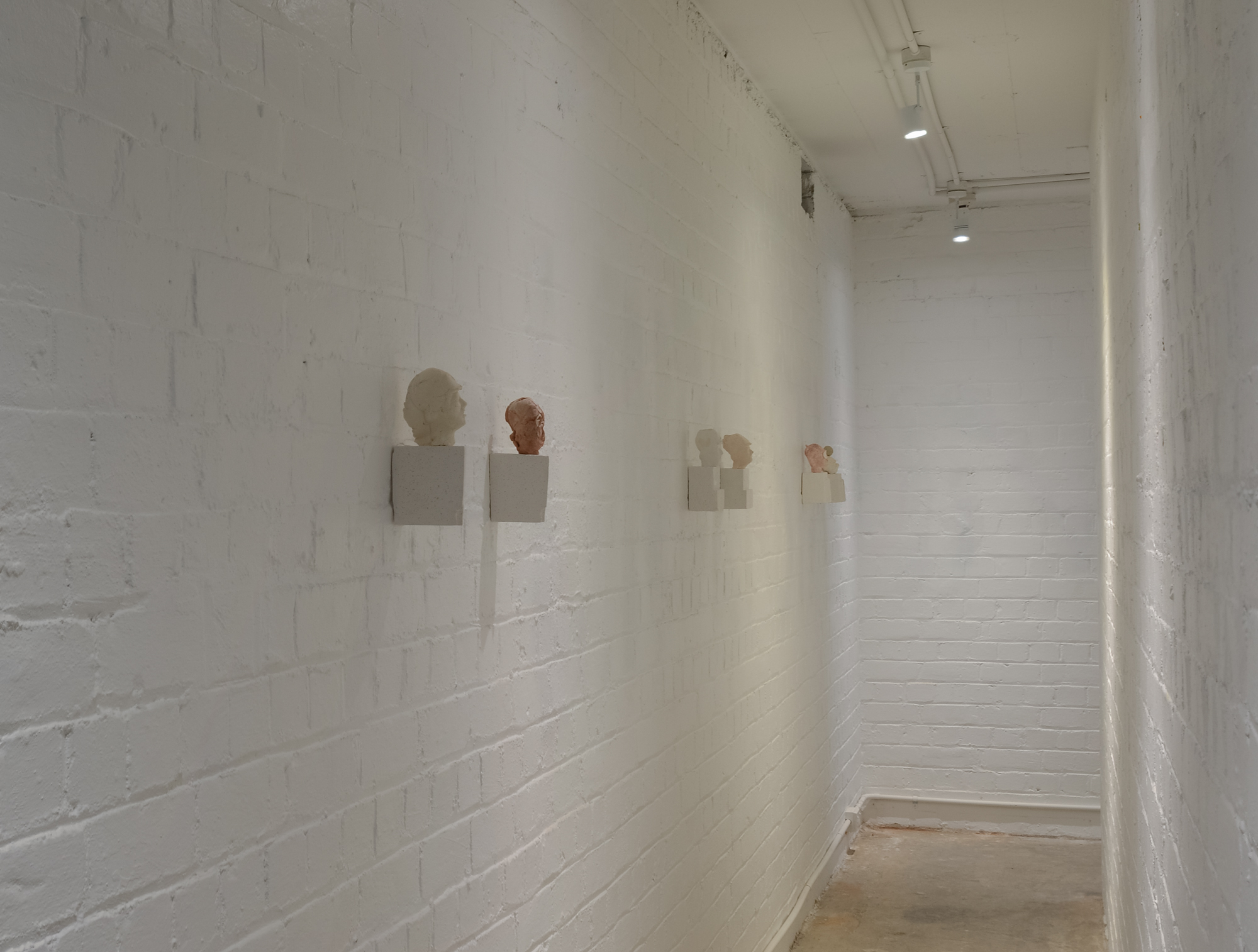 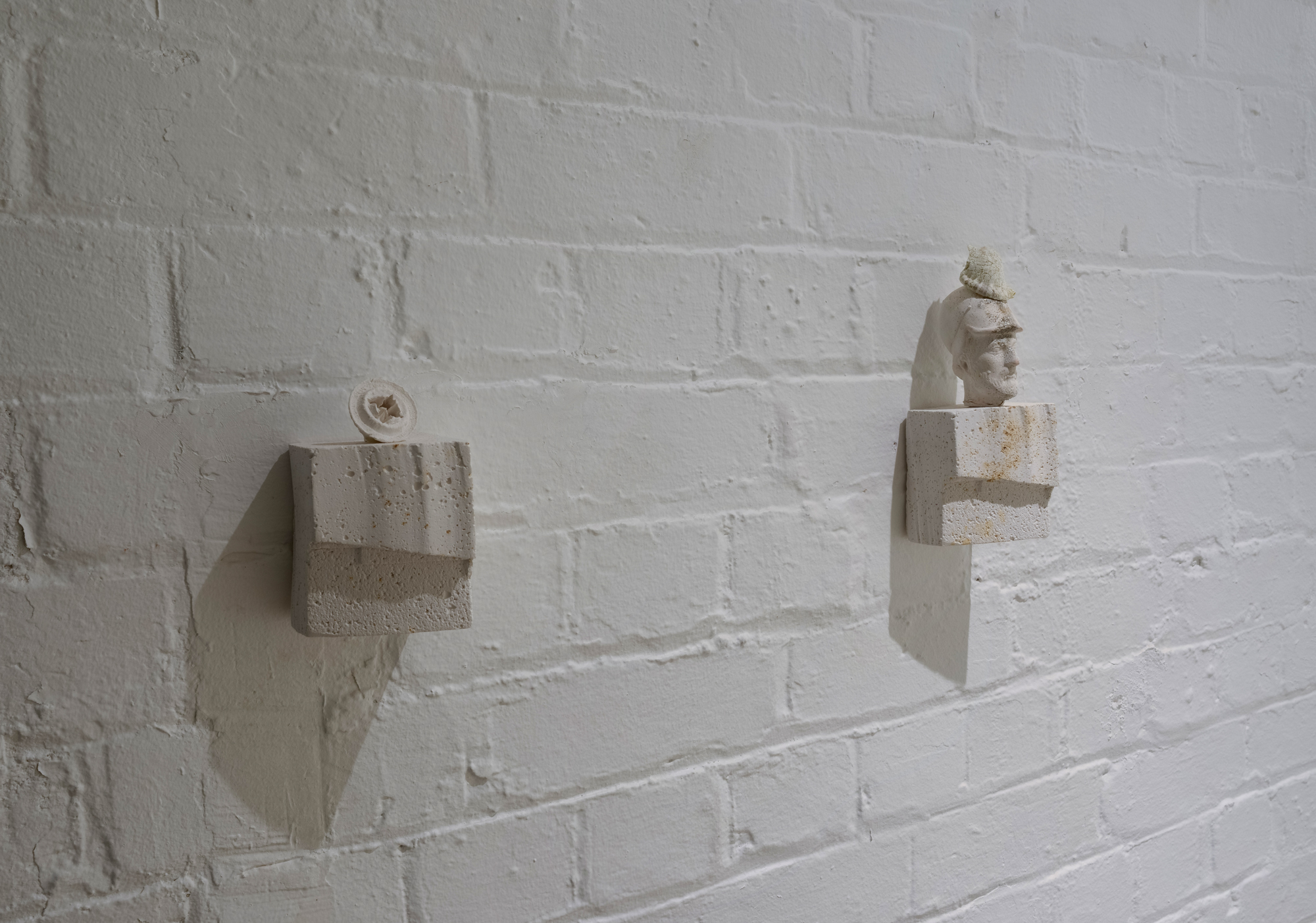 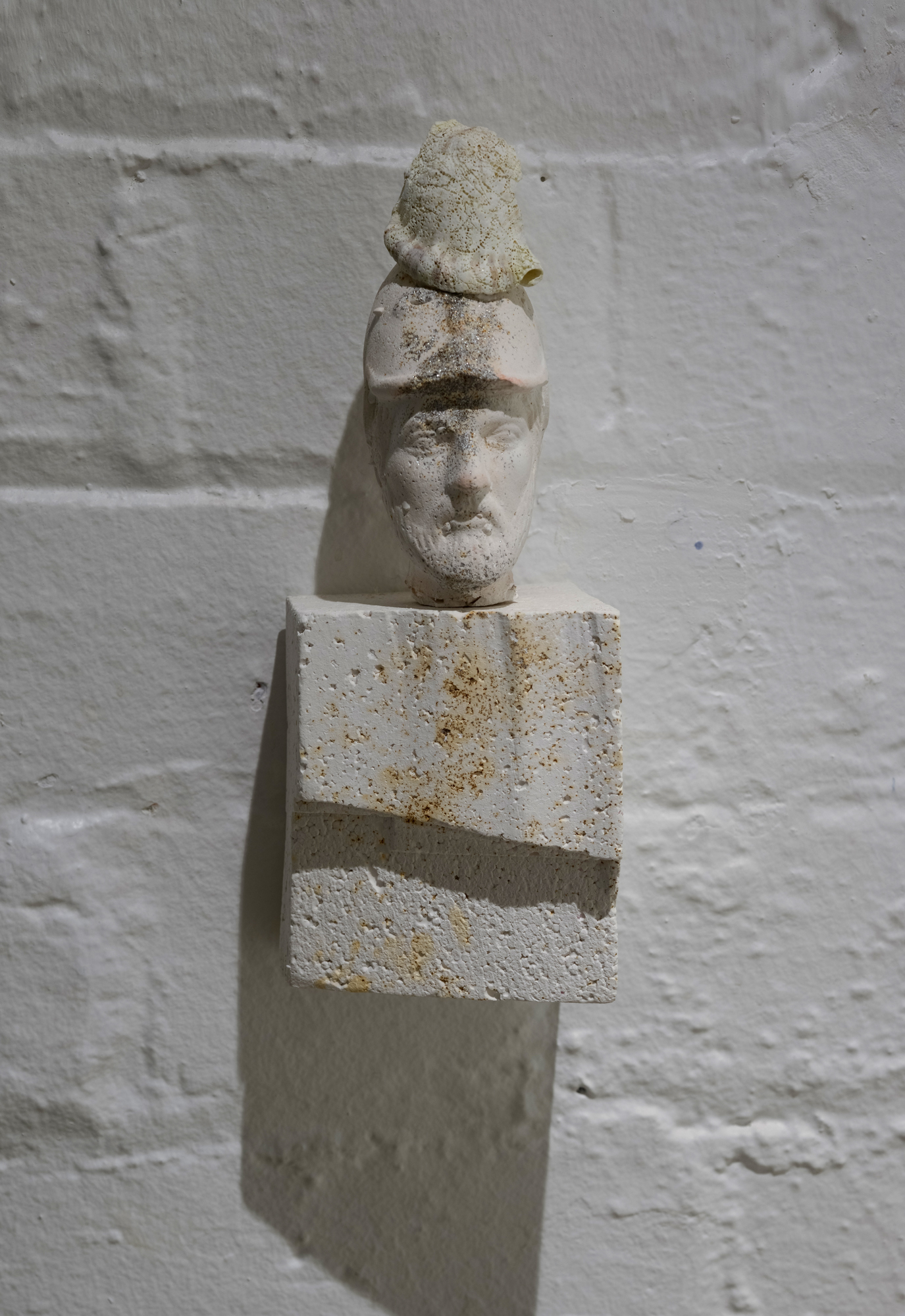 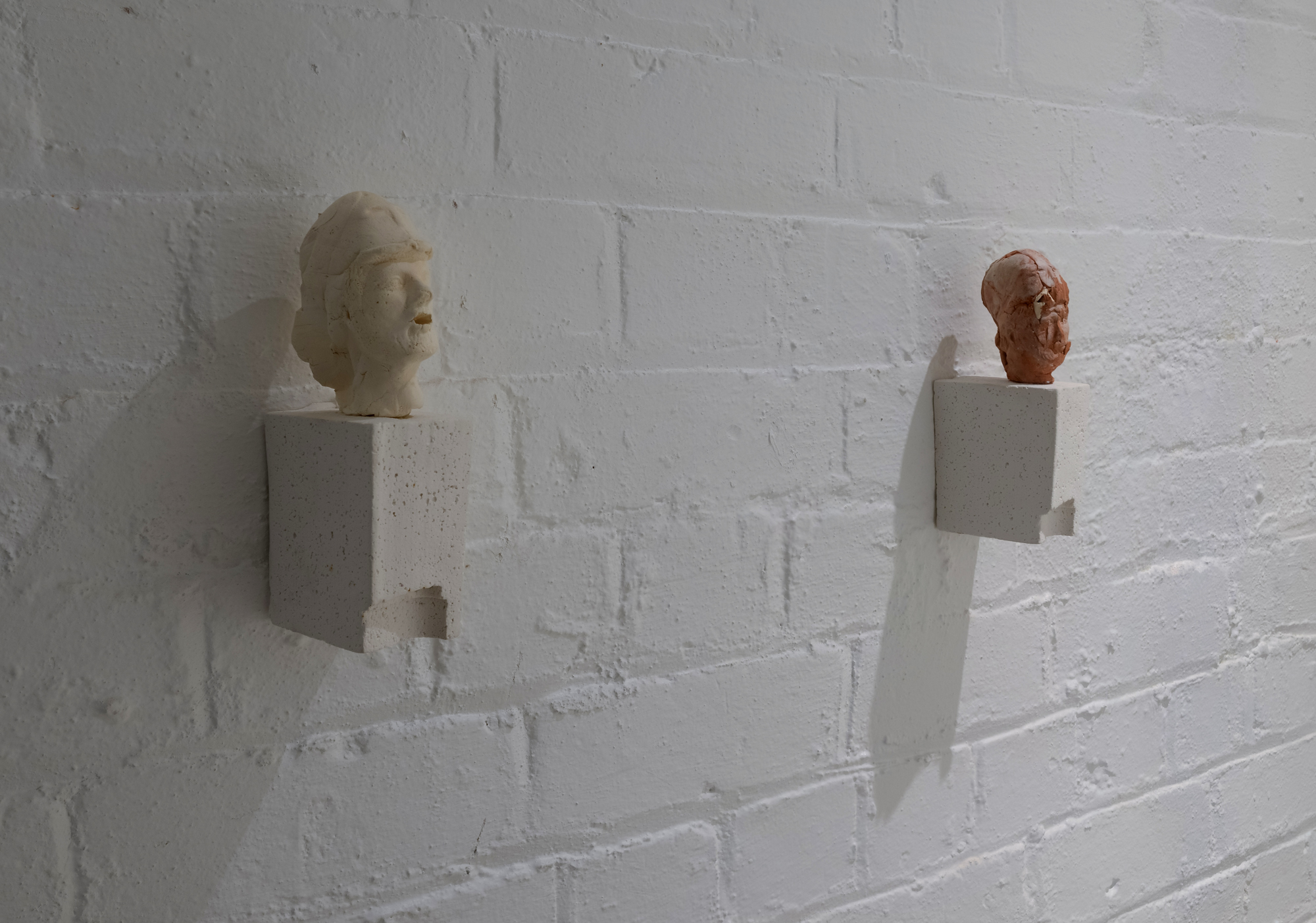 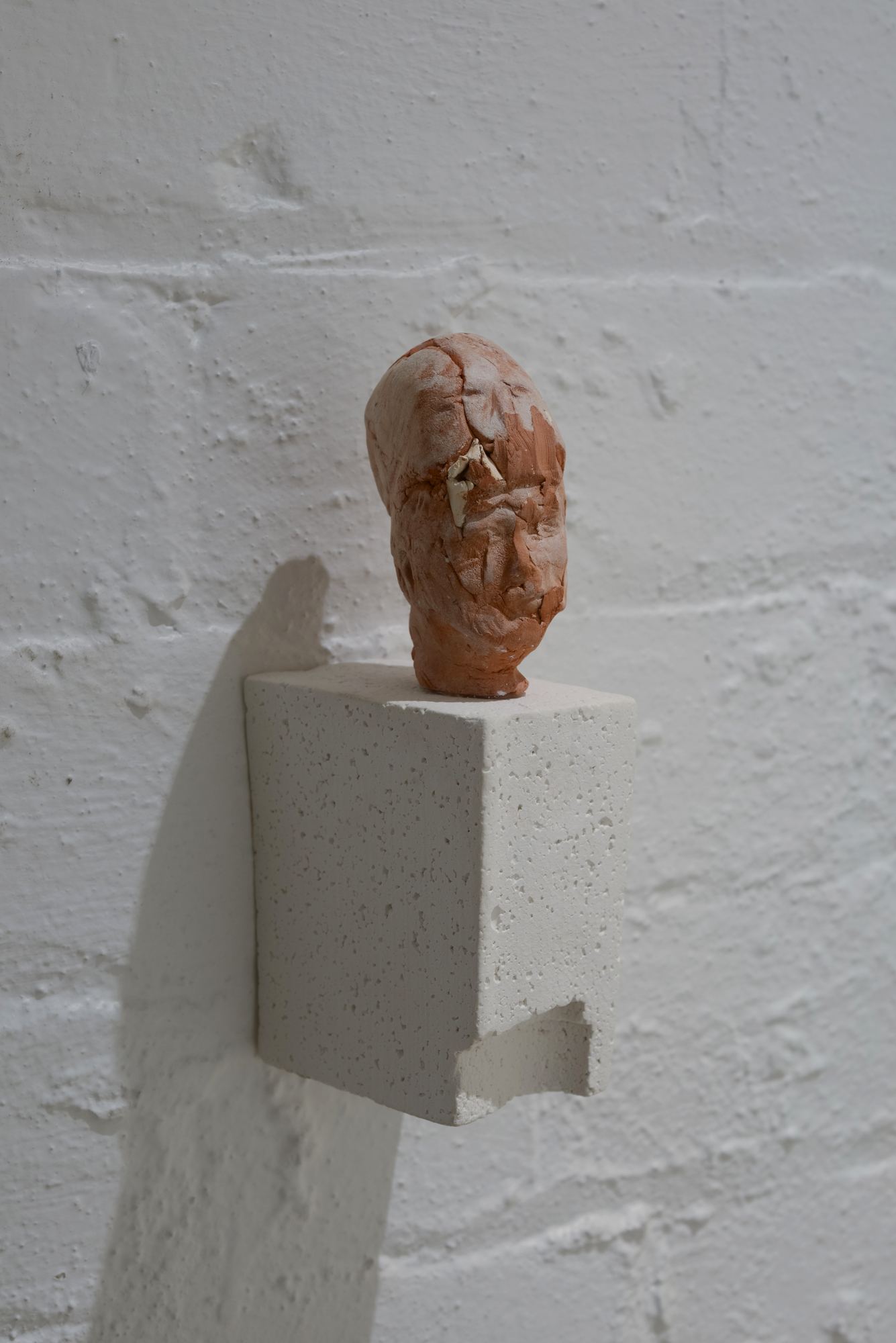 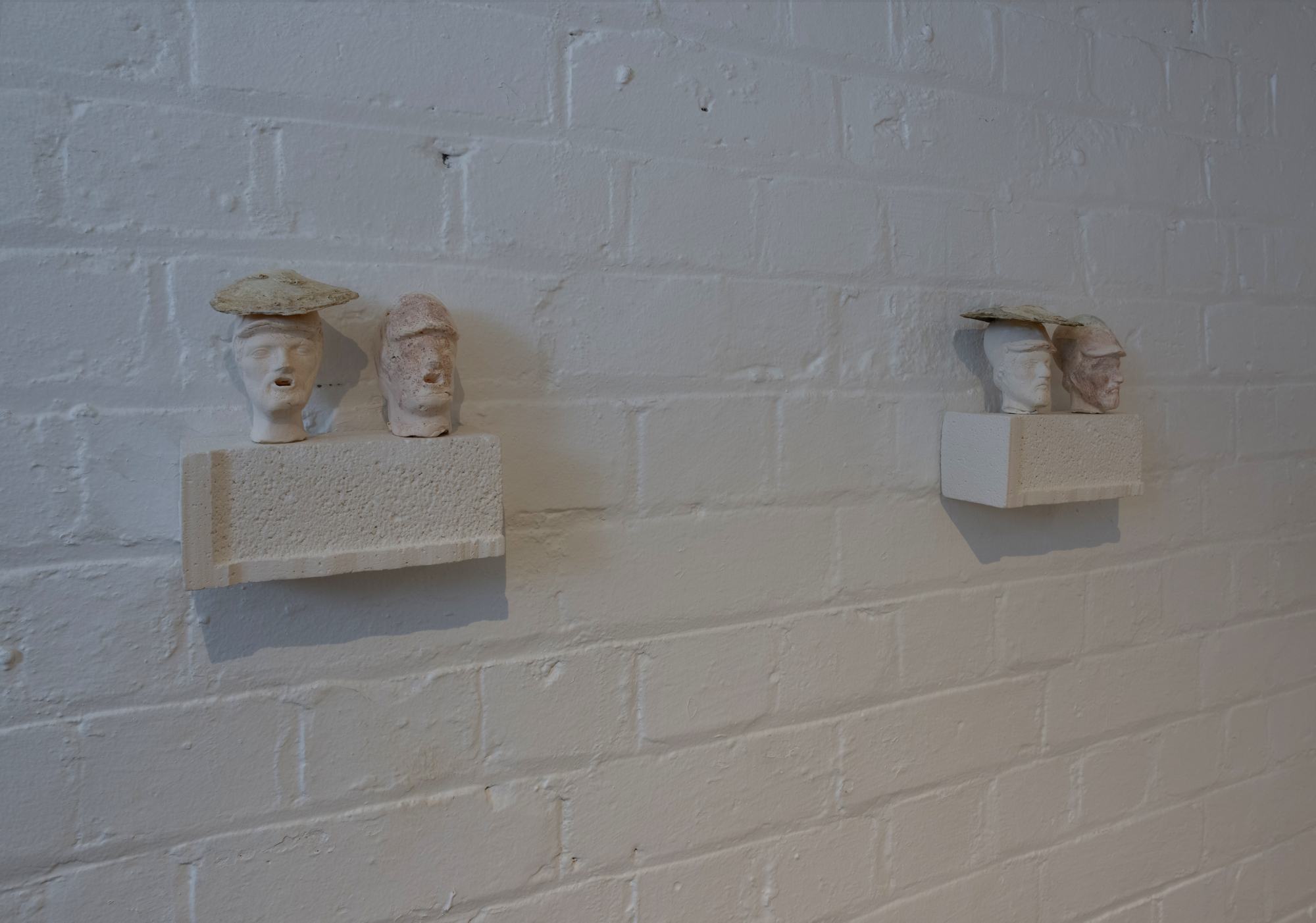 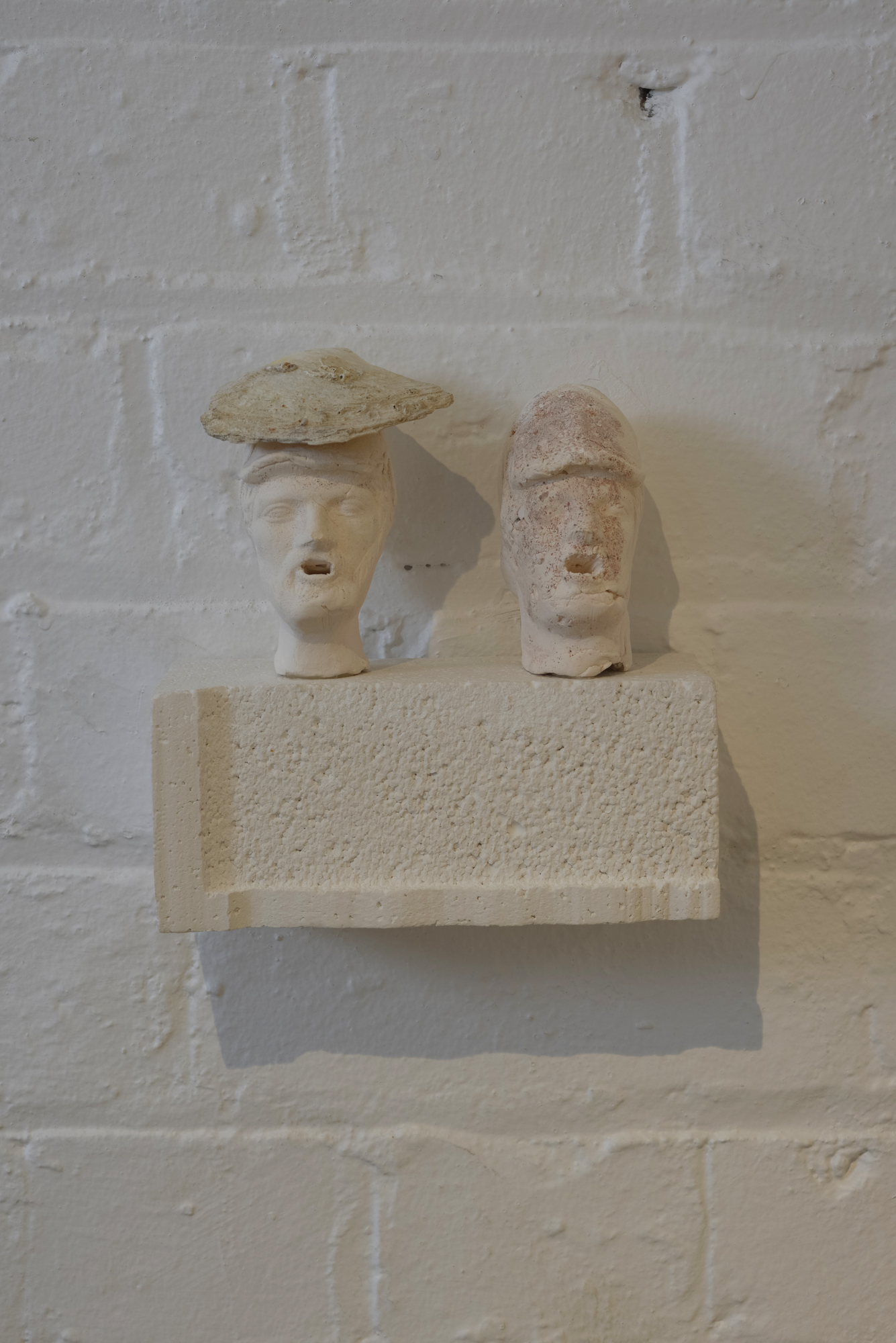 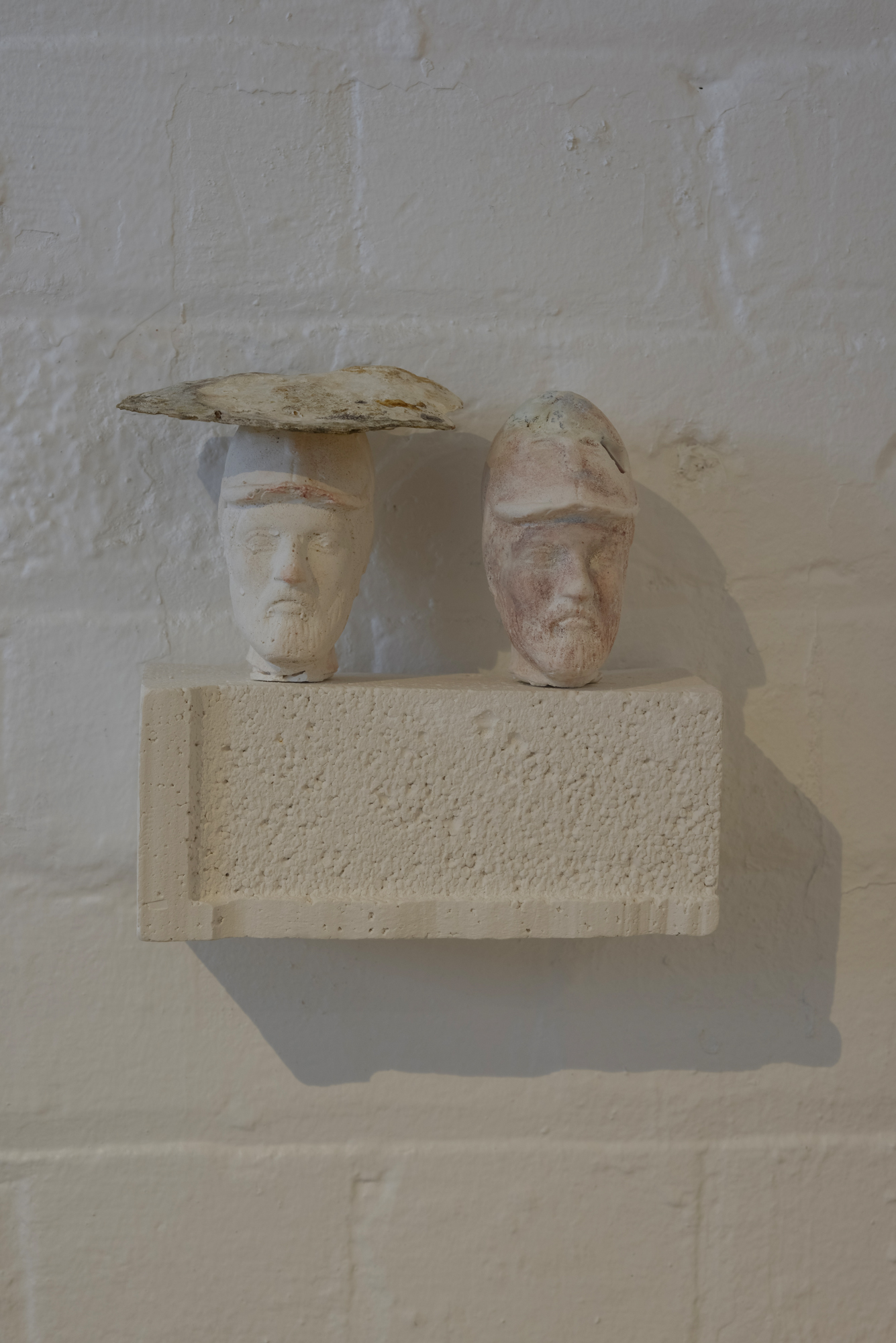 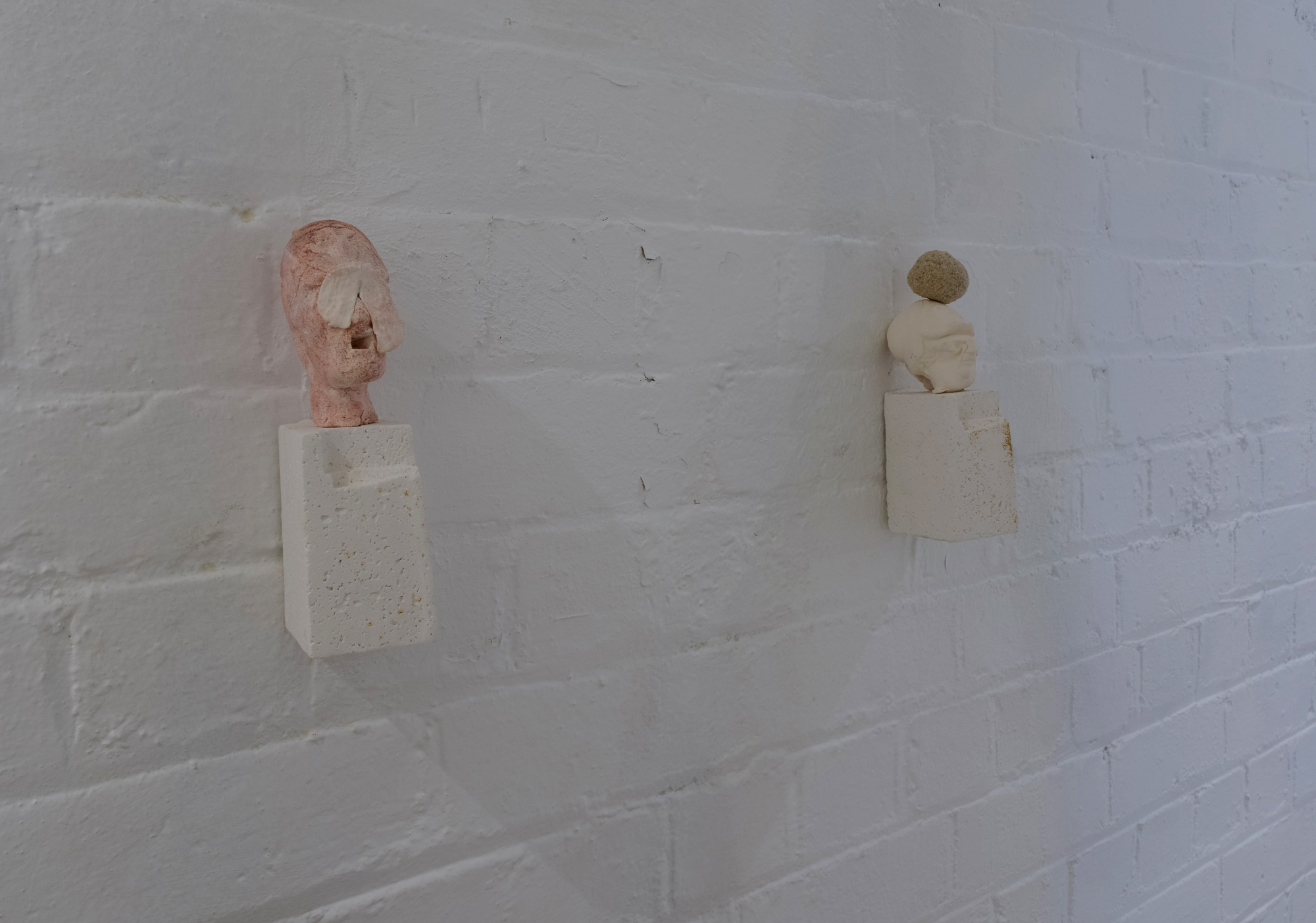 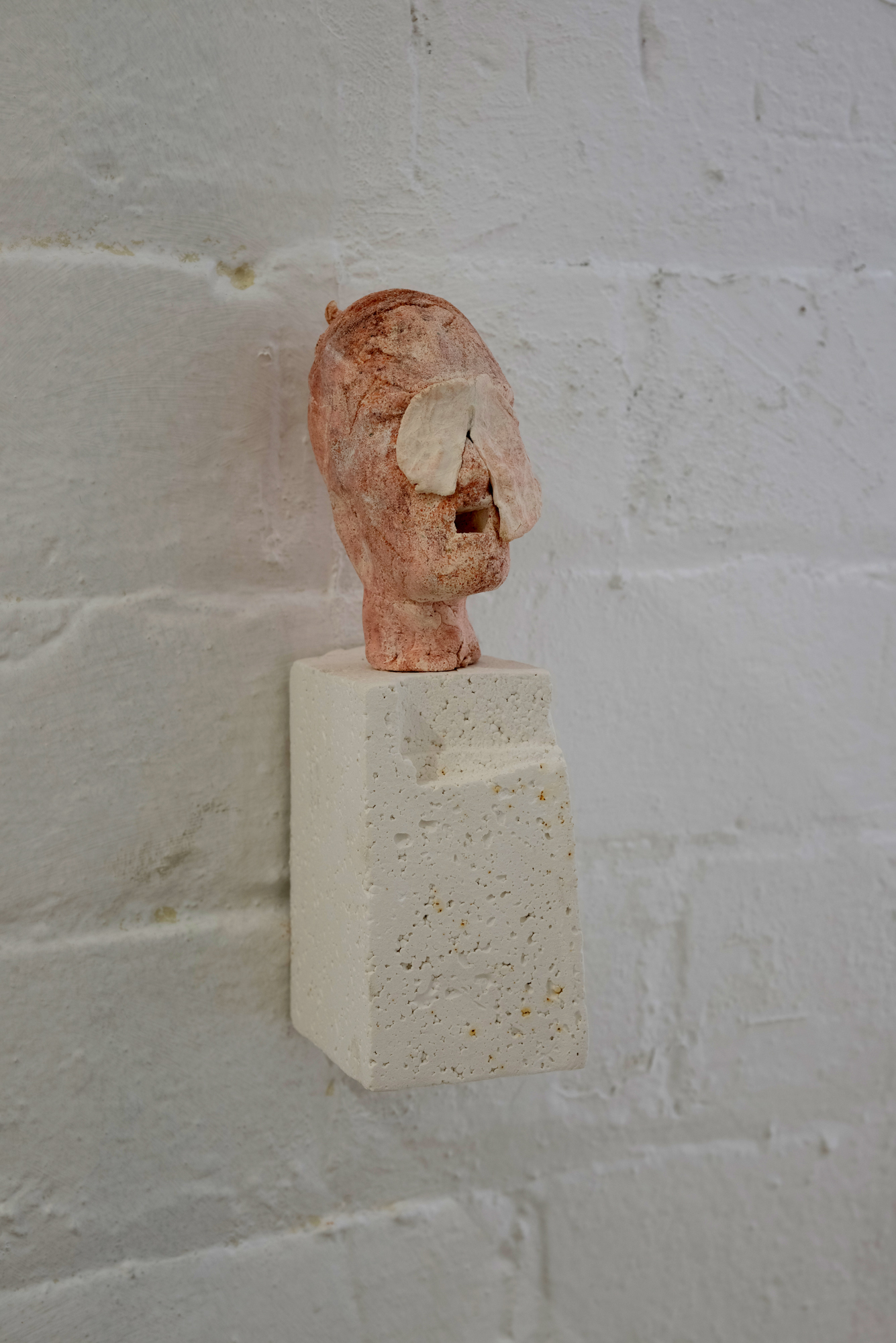 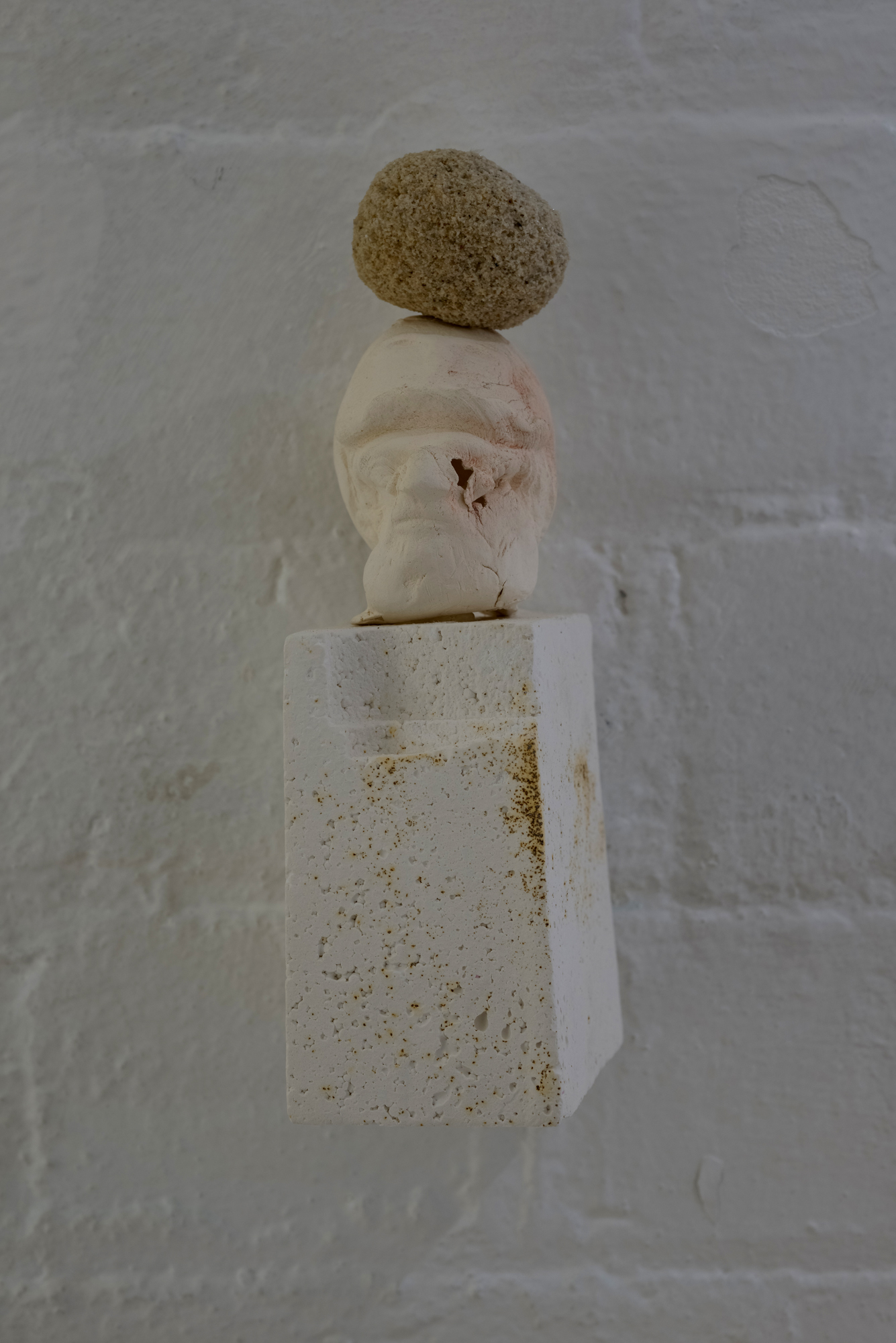 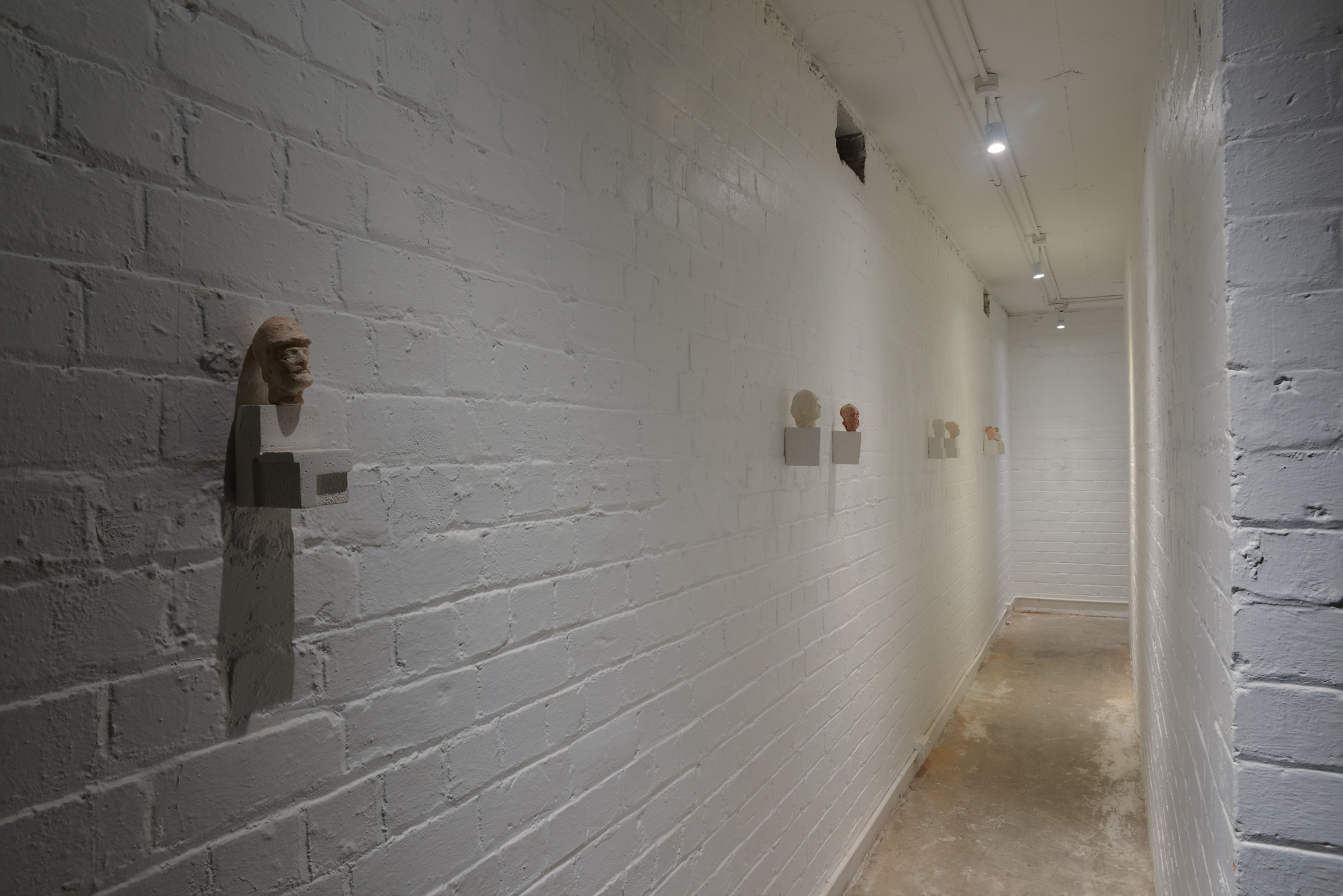 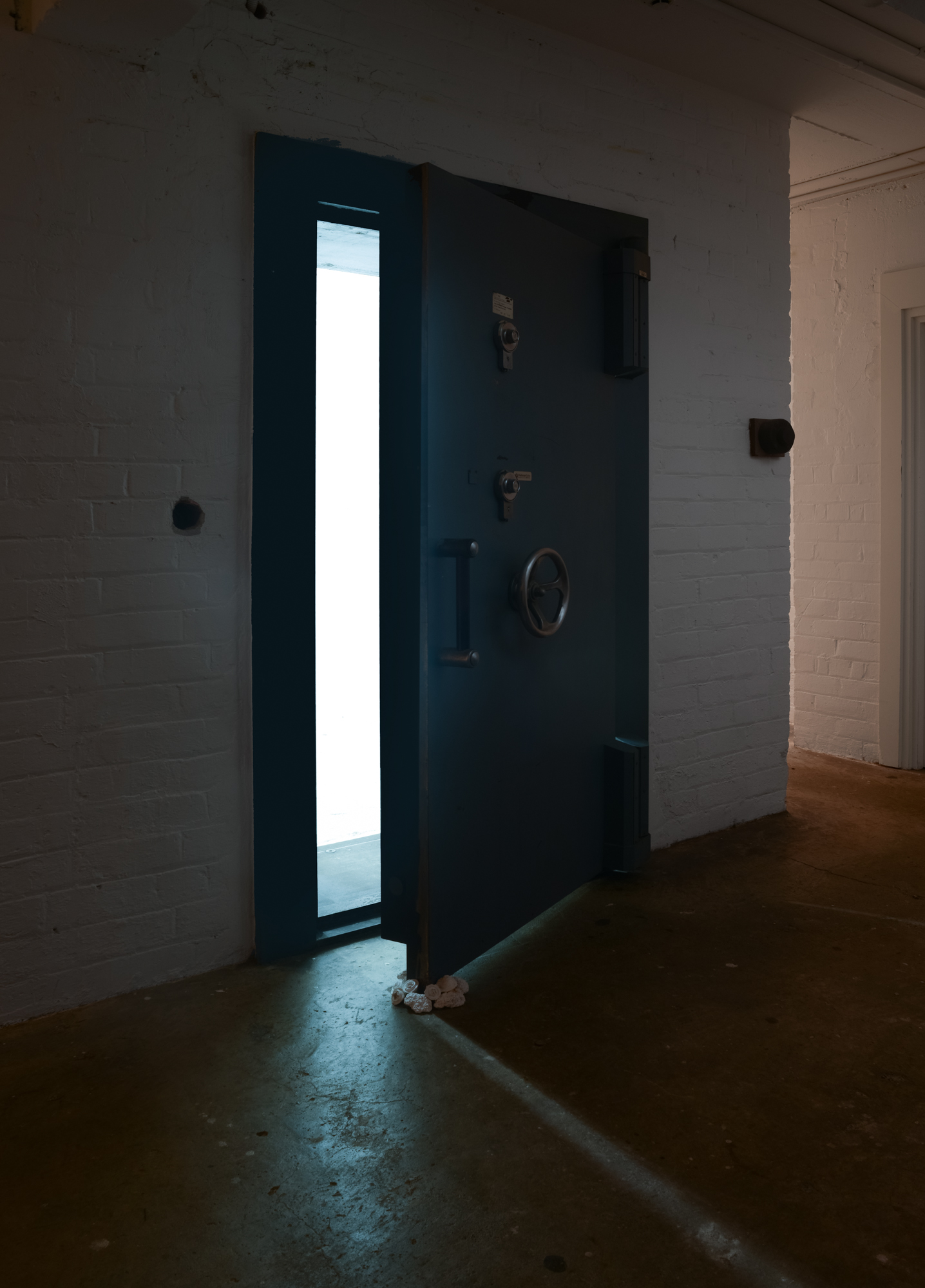 Drawing on the objets trouvés from his vast library of sculptural curiosities, Koji Ryui presents a second installment of work that explores the cosmic sounds A and Un. The title, A-Un, refers to the first and last letters of the Sanskrit alphabet, as well as life and death in Japanese Buddhism. The exhibition investigates a variety of creation myths; representations of beginnings and ends in space and time.

In figurative representations of the sounds A and Un, Ryui presents a series of paired clay heads that line the gallery walls.  Within each pair is an opened mouth figure (A) and its consort, a closed-mouth figure (Un). Through this simple binary gesture Ryui creates an opera of suggested sound and silence, while also referencing ancient architectures. Clay, a traditonal sculpting medium, is laced with more playful materials. The heads themselves range from representations of Perseus to anthropomorphised ceramic shapes.

Inspired by the use of vessels in domestic and ritualistic environments on a recent trip to Japan, Ryui created the Singing Vessels series. By repurposing glass vessels into melodic instruments that allude to Tibetan Singing Bowls, Ryui assigned new physical and cultural identity to the commonplace glassware, ritualising the functions of the everyday. The Singing Vessels were played in a previous exhibition with strikers made from PVC pipes wrapped in animal hide. Poetic contrast between the hides that dull and absorb sound, and the glass that echoes and reflects it, creates something of an orchestra of silences and sounds. In exploring the materiality of the glassware and performing with them, Ryui arrived at a new language for his hybrid objects, captured and rebroadcast from a hidden source within the installation. In this exhibition Echoer, a recording of the Sound Vessels is played from within the vault, appropriating the enclosed space into an echo chamber.

A consistent thread in Ryui’s work is an  ongoing fascination with materiality; what things are and how they work (or more specifically, how they can work for him). Akin to the Mono-ha artists of the mid 1960s from Japan and Korea, Ryui establishes his own ‘school of things’, liberating materials and granting them the time and space to express themselves freely. It is this guiding, light-handed approach that bestows Ryui’s works with such quiet magic. Within the shifting contemporary context, Ryui pauses to remember and renew forgotten materials, and through his examination of multiple histories, creates a unique new mythological vocabulary.

Koji Ryui is currently developing a new body of work for the 21st Biennale of Sydney, 2018. His work has been exhibited in major galleries internationally, including the Museum of Contemporary Art (MCA), Sydney, and the MORI Museum, Tokyo, and is held in many public and private collections including the Art Gallery of NSW (AGNSW), Sydney; Monash University Museum of Art (MUMA), Melbourne; Museum of Contemporary Art (MCA), Sydney.