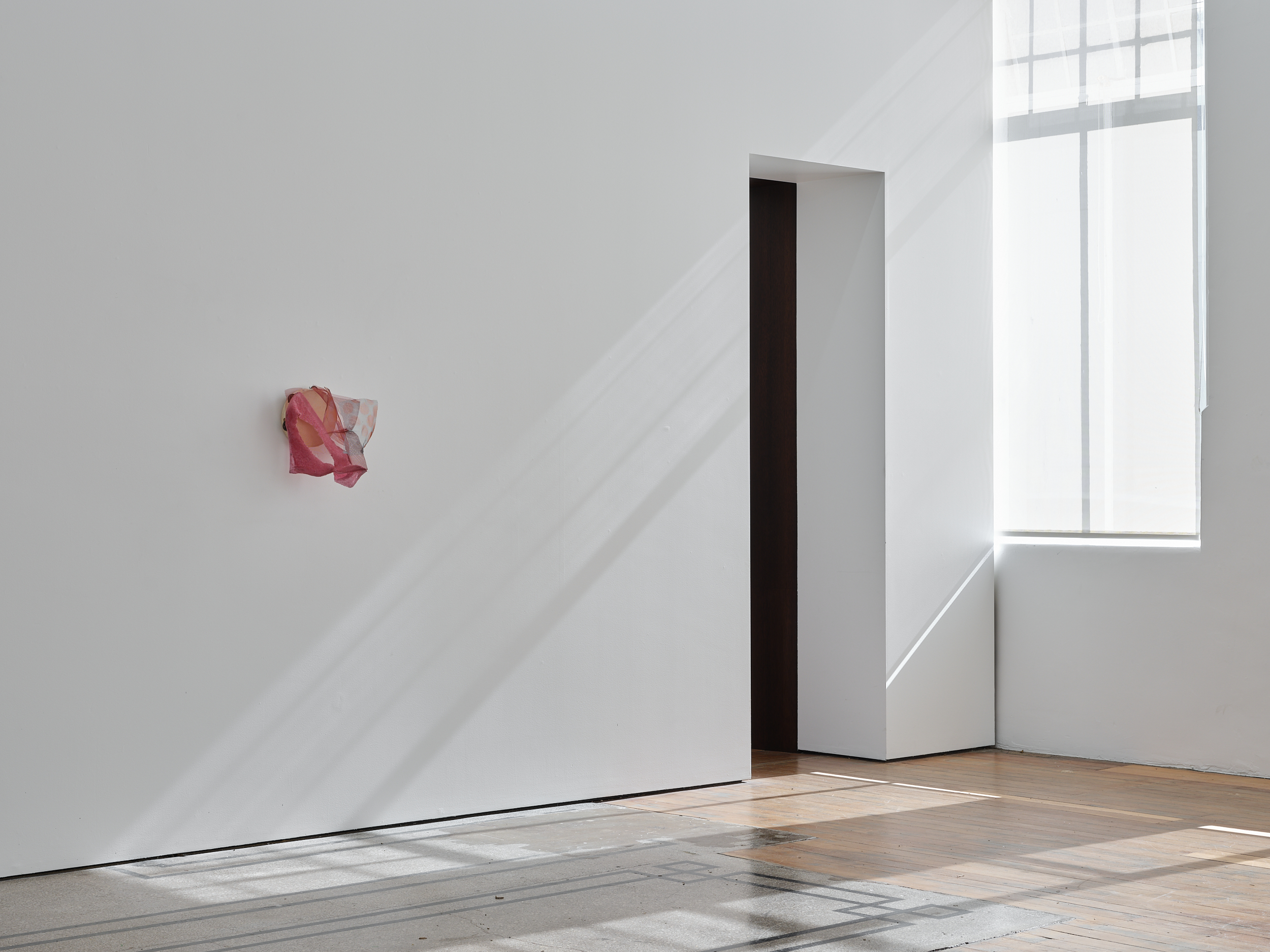 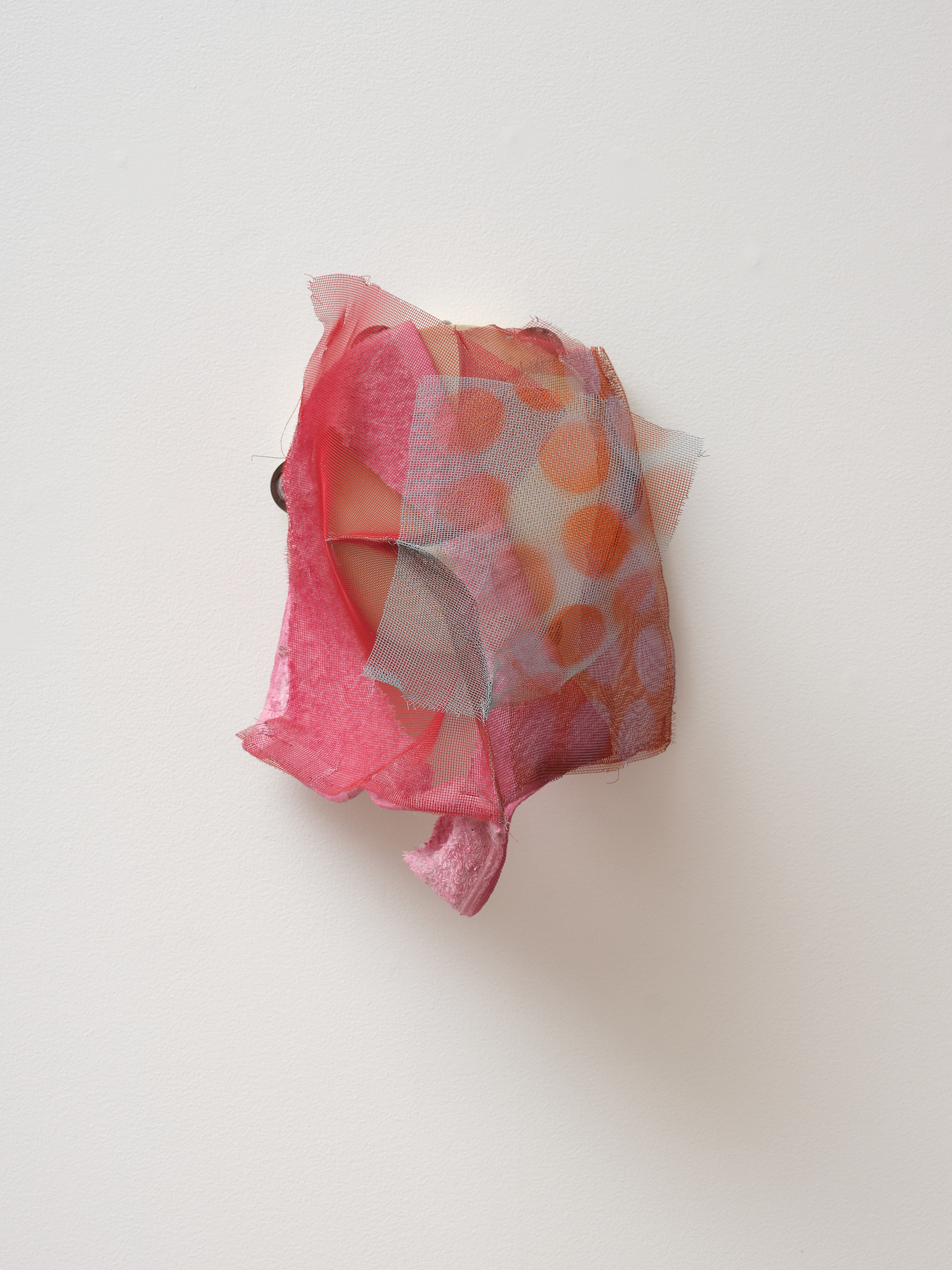 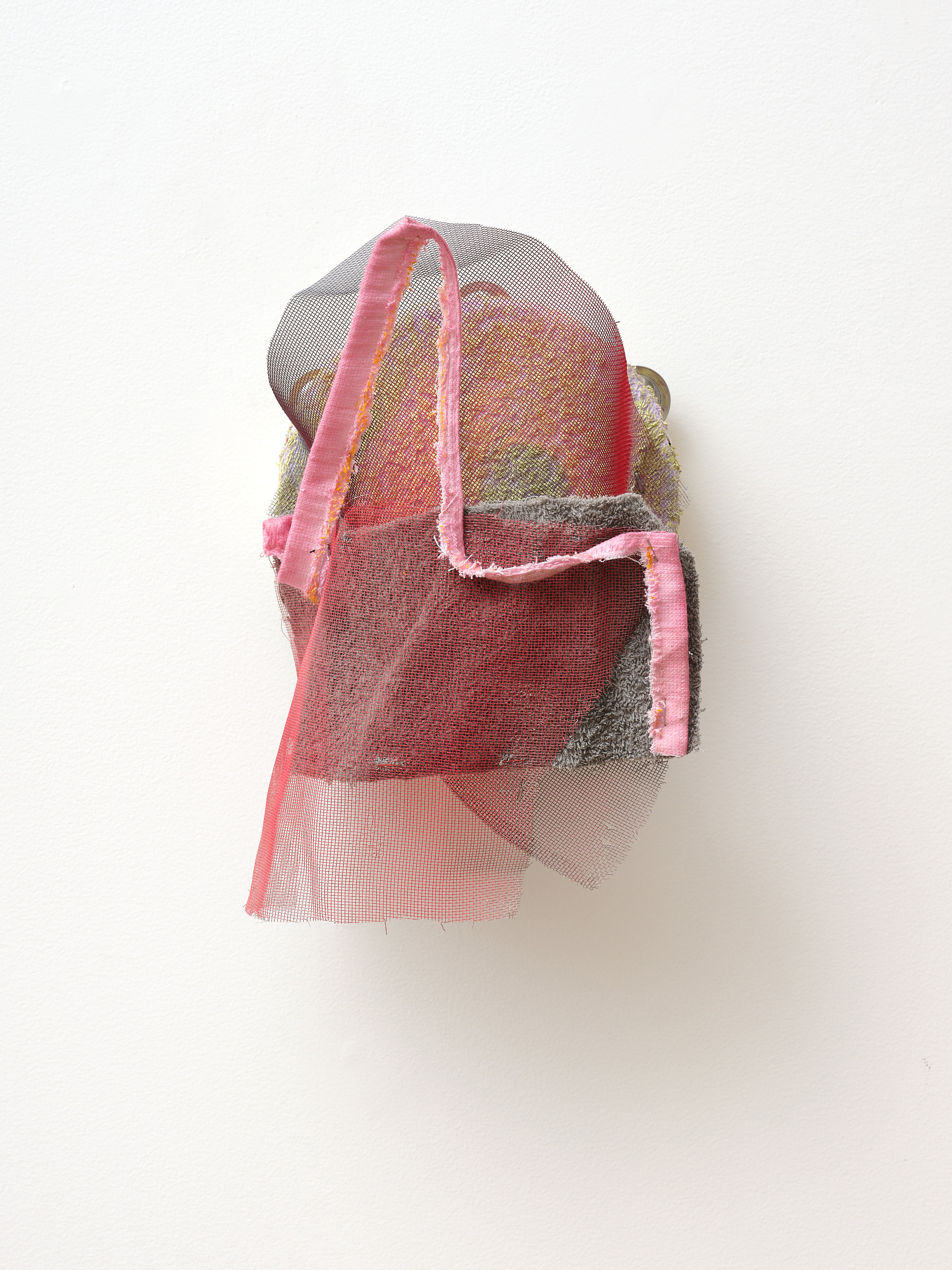 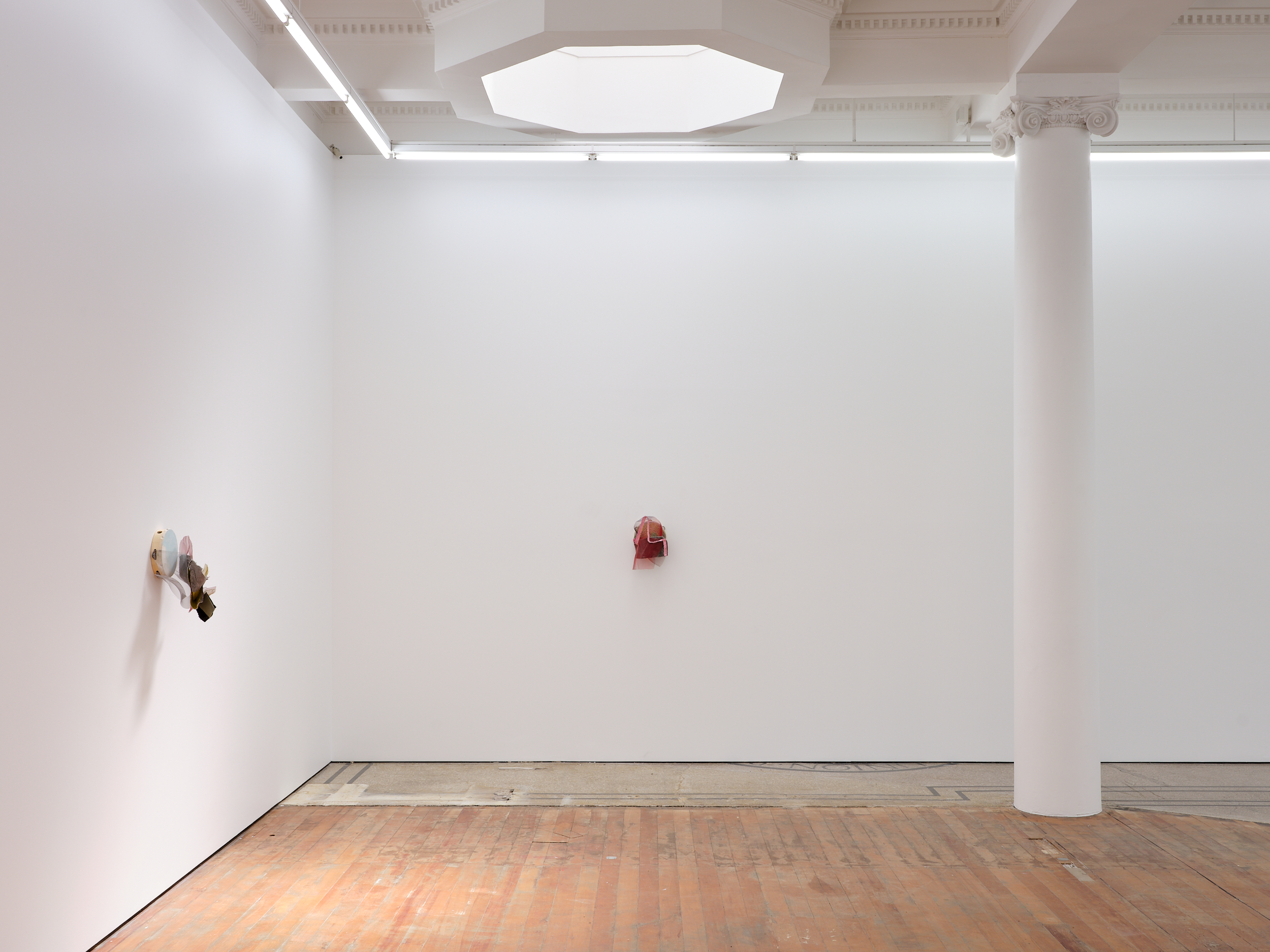 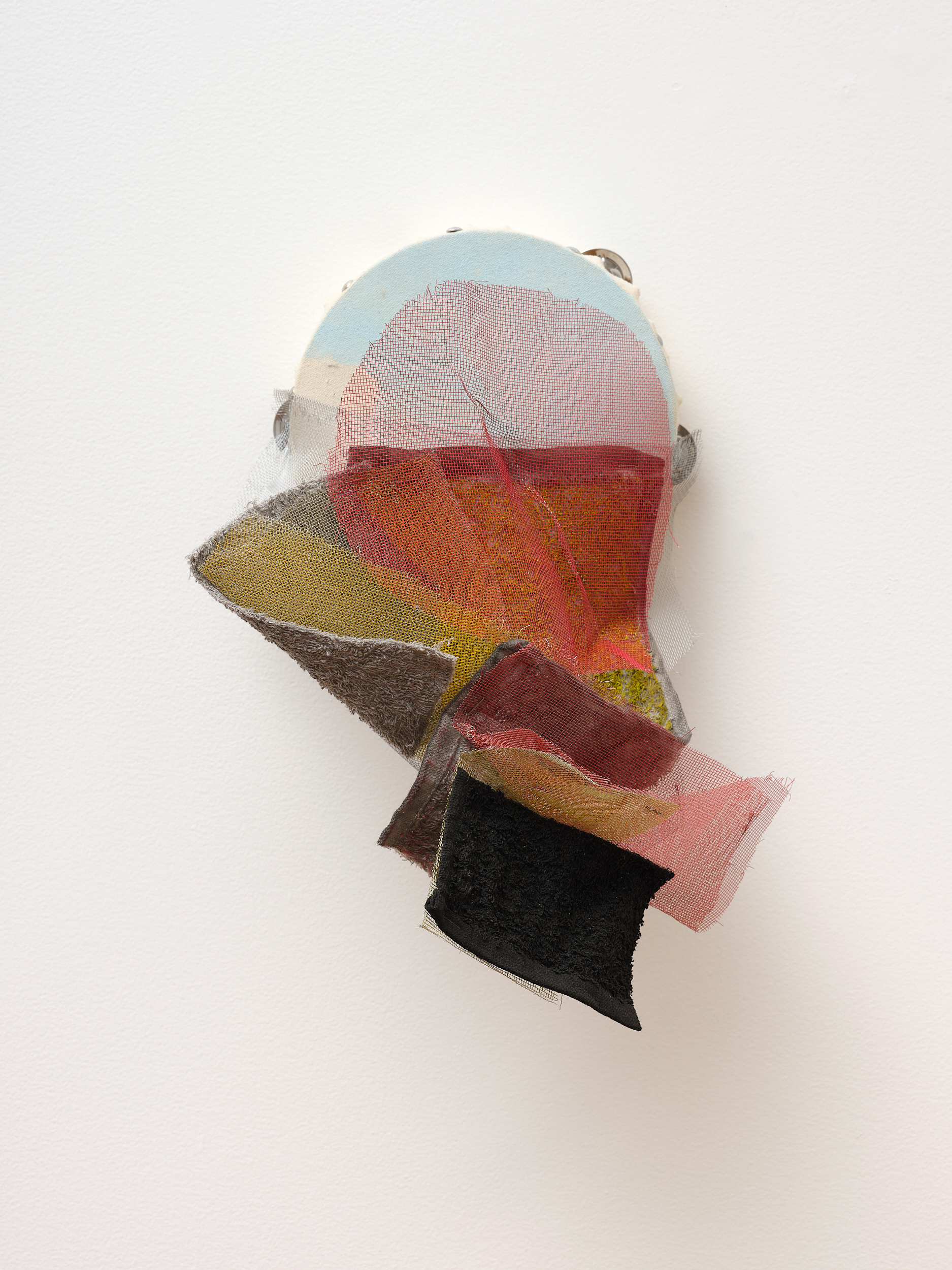 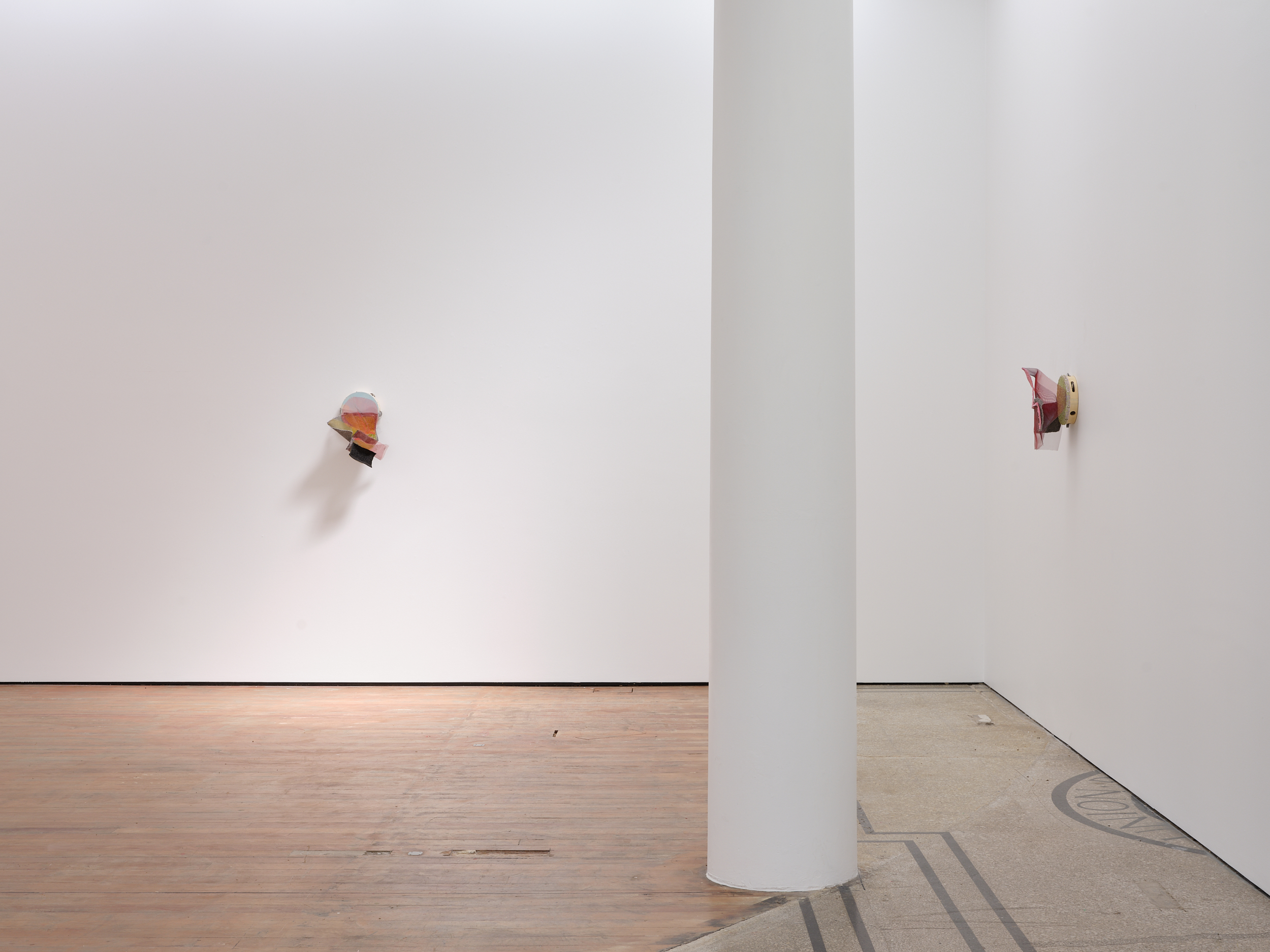 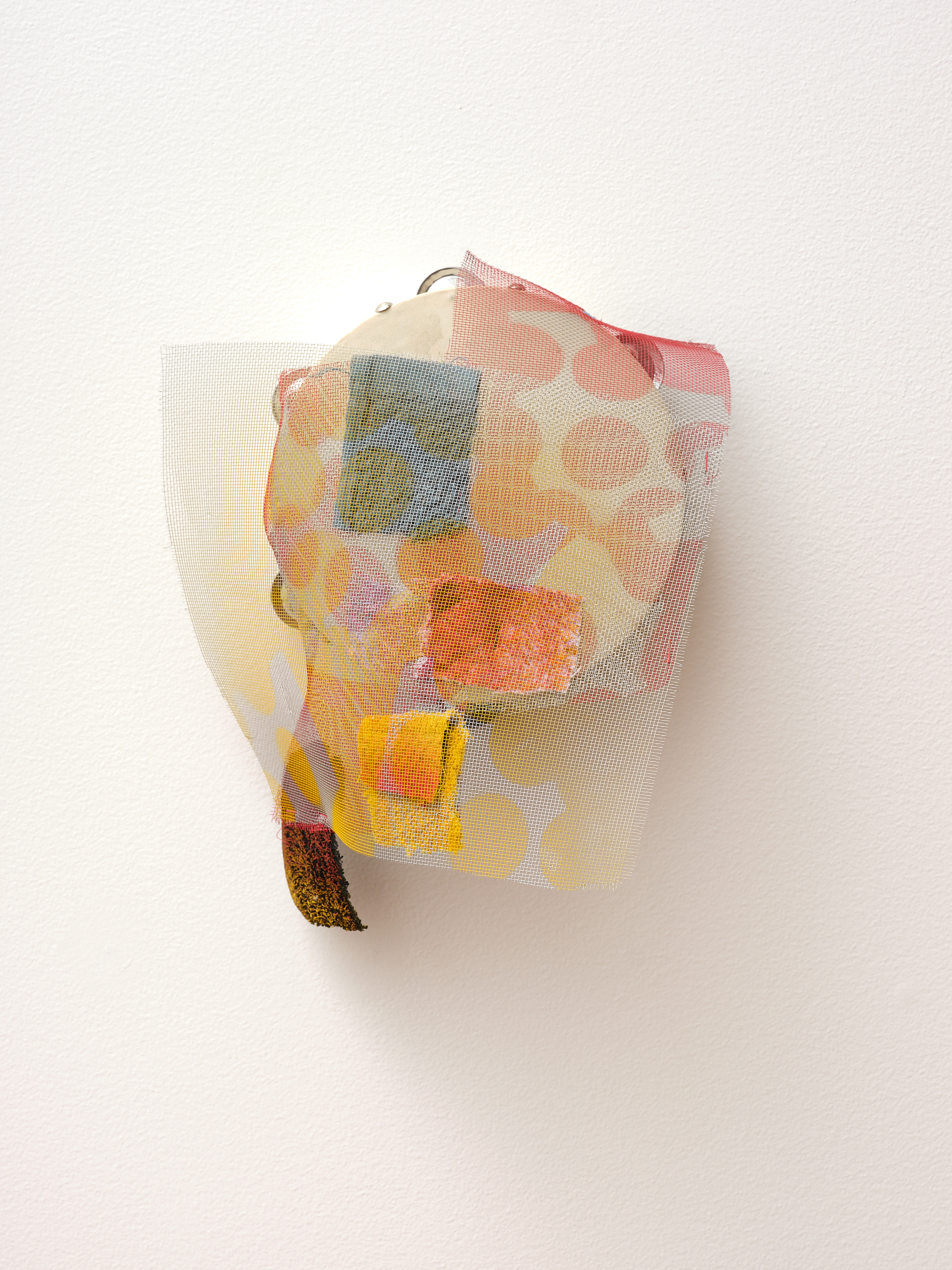 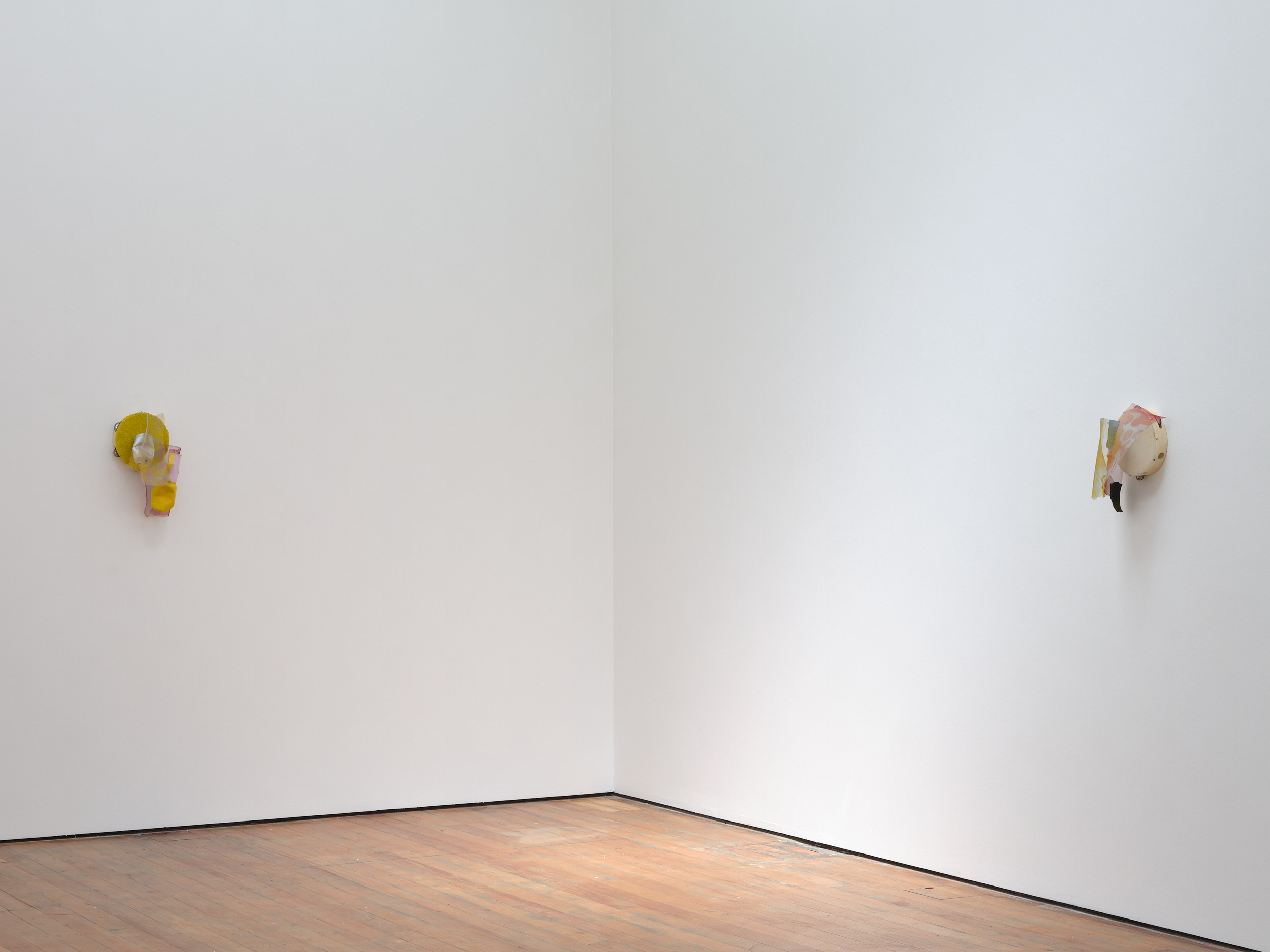 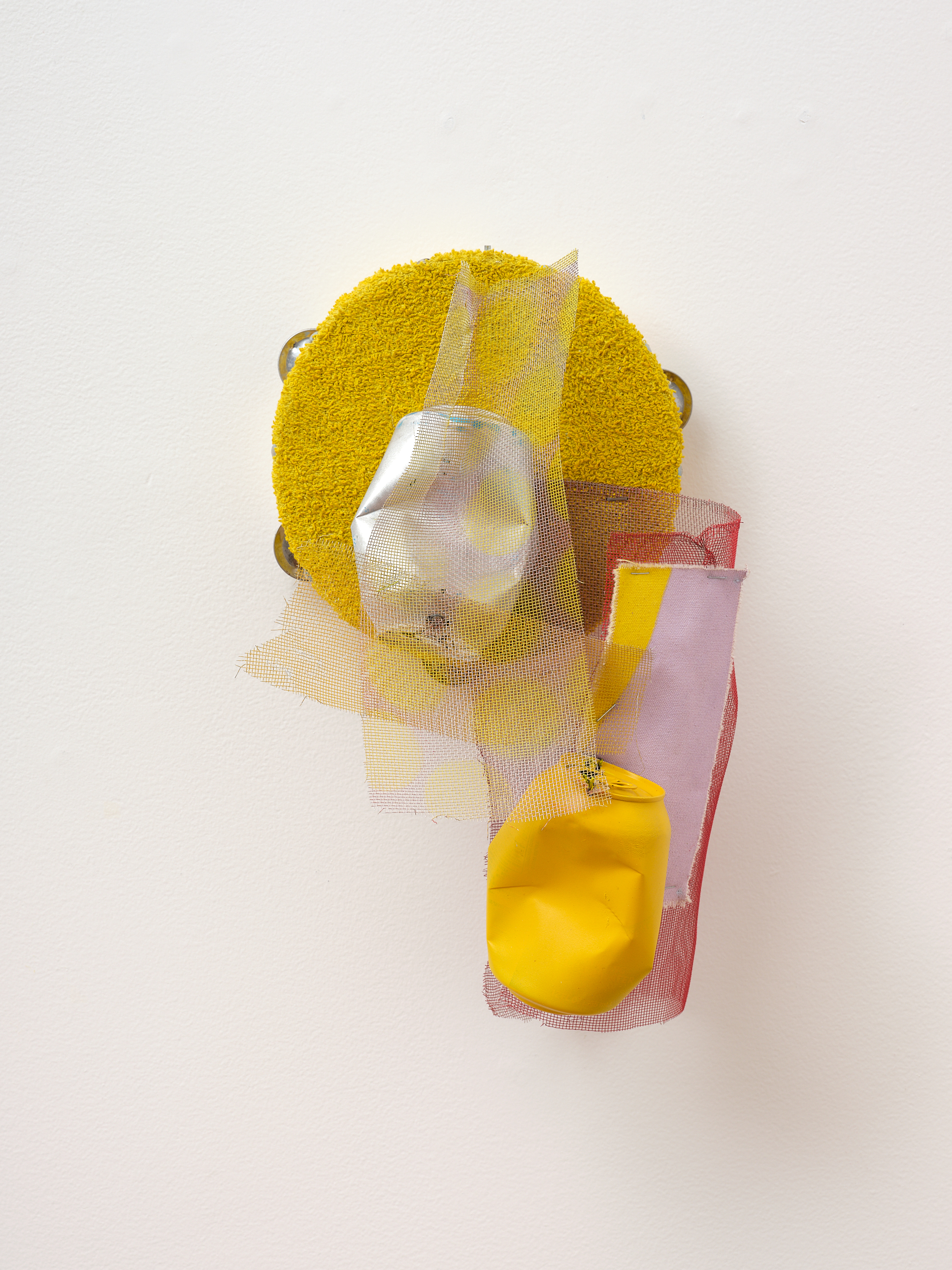 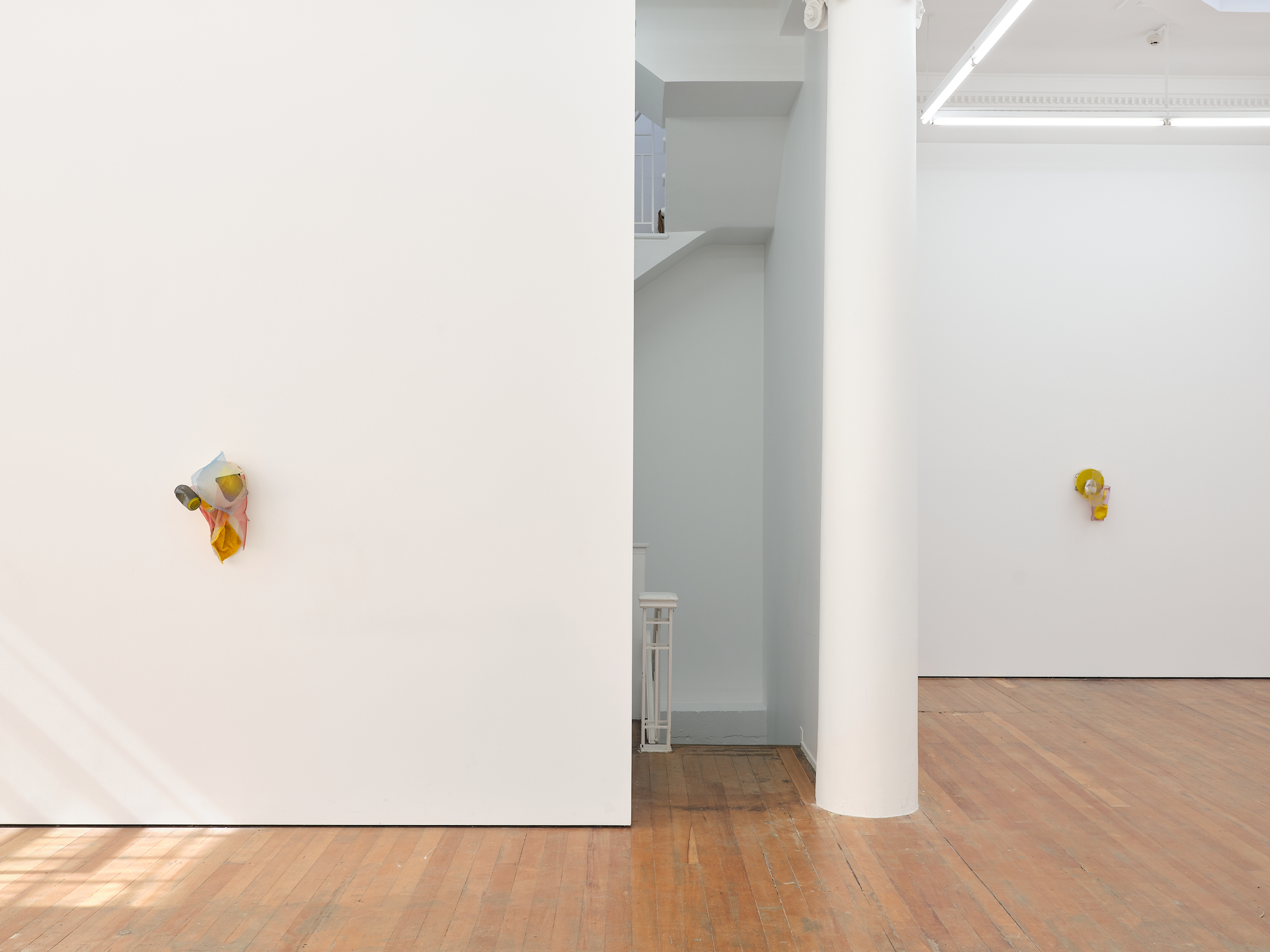 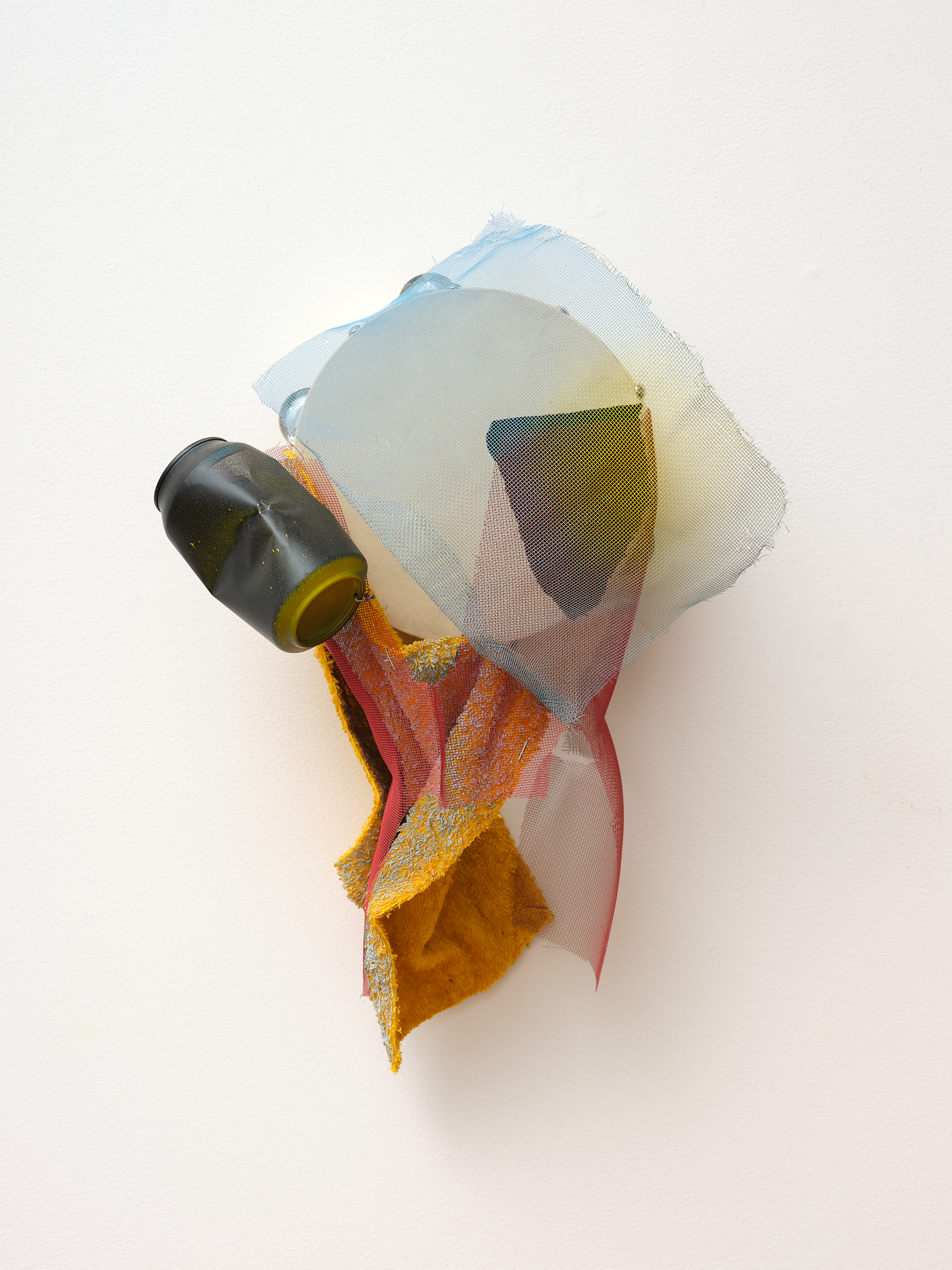 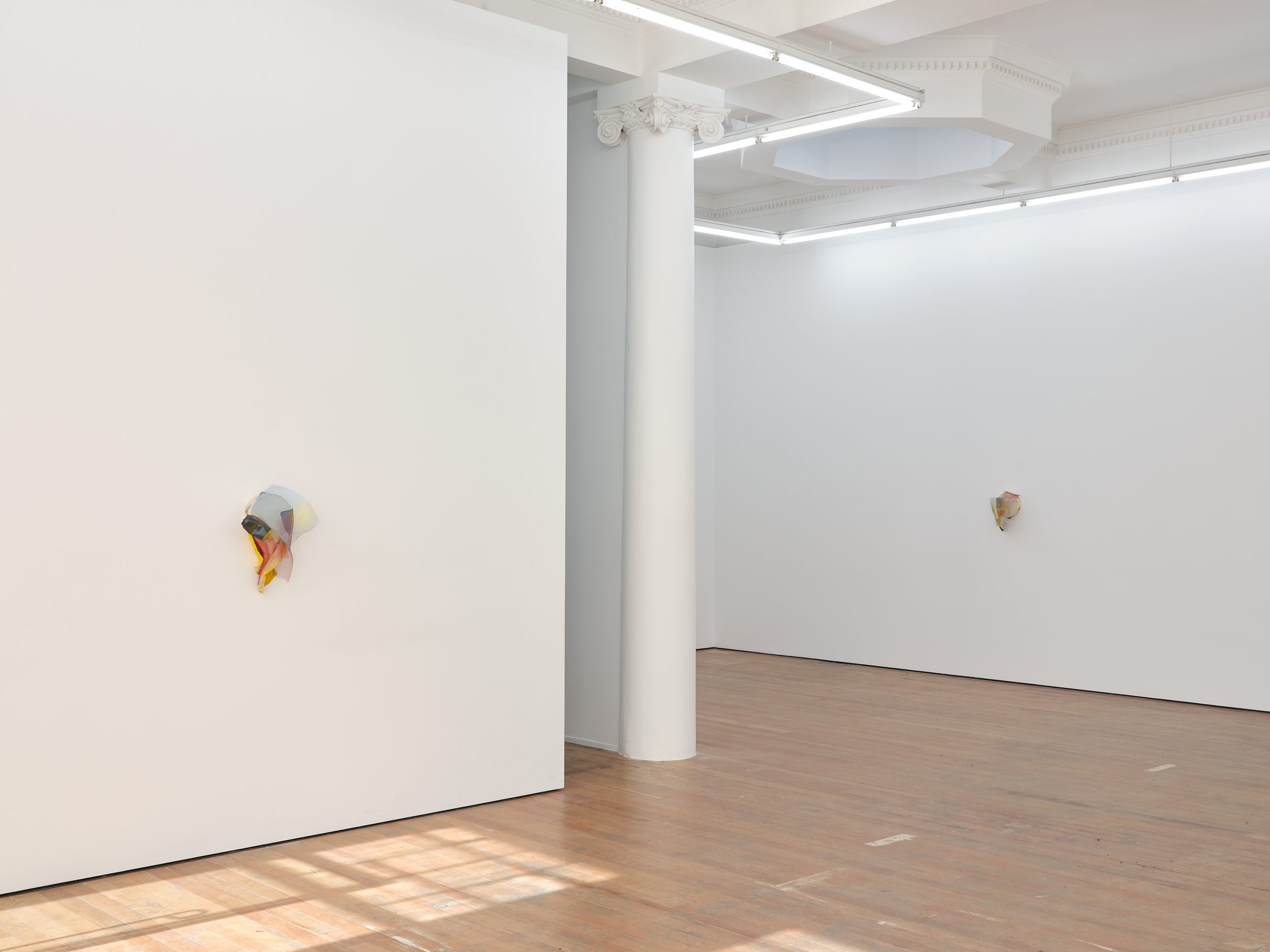 Desert Flowers is a solo presentation of work by New York City-based artist Paul Lee. This suite of delicate and playful sculptures is made up of configurations of deftly-manipulated, everyday materials.

Pieces of canvas, towelling and aluminium screening have been cut, painted and gathered together with wire and staples in careful compositions. These rather brute and raw fragments of material are accompanied by manufactured objects, empty soda cans, washcloths as well as the wooden frames and steel jingles of tambourines. These various materials were all sourced from the artist’s studio and the works made during lockdown. Included are scraps from other works so there is further overlap between the organic (found, used studio materials) and the intentional.

Each of Lee’s sculptures seem to float or hover, suspended before the gallery walls obscuring the surface of the tambourine on which each piece is built. There is an overlap of visual and physical space as the function of the tambourine is displaced. Sprayed dots made with the aid of a stencil of tambourine jingles act as a visual echo of sound. Ambiguity has been built-in, the brightly-coloured artworks can be read as simple formal experiments, elaborate head- wear, facial expressions, musical compositions, or flowers, either earthly or martian.

An even more ludic and associative perspective can be taken. Small parts of screens, semi-transparent point towards containment, an inside and an outside. Muted, the wooden supports of the tambourines are missing their skin and the soda cans have been emptied of liquid. Washcloths also hint at water in the past tense, as well as the residue of absent bodies and entities. – Paul Lee (b.1974, London) lives and works in New York City, New York (US). Lee received a Bachelor of Fine Arts from Winchester School of Art, Winchester in 1997. His work has been included in the group exhibitions Home Improvements, Fraenkel Gallery, San Francisco (2017); UIA: Unlikely Iterations of the Abstract, Contemporary Arts Museum, Houston (2013); Flaca, Portikus, Frankfurt (2011) and Absentee Landlord, Walker Art Center, Minneapolis (2011). Solo exhibitions include: Tambourine Heart, Adams and Ollman, Portland, Oregon (2021); I see with my body now, Karma, New York (2019); Pestle, Michael Lett, Auckland (2017); On The Beach In The Dark, Untilthen Gallery, Paris (2015) and Paul Lee, University of the Arts, Philadelphia (2015).

This is Lee’s third solo exhibition at Michael Lett.